Head of Communications for Formula 2 is a huge job, but combine it with the same role for GP3 and you have a mammoth position that requires someone who’s on their toes and is able to work under pressure. Alexa Quintin is the woman who does this, with just one other colleague to help her, her weekends tend to be pretty hectic. I spoke to her about her career and working with some of the best young talent from around the world.

The story behind Alexa’s love for the sport is an incredible tale. Her father was a racing driver in Morocco before moving back to his native France, where he continued his career mainly in Gordini Cup. At the beginning of each season, the drivers would meet with engineers and potential mechanics. In one particular season, the team had gathered and there was one female mechanic. Alexa’s father who she admitted was “a bit macho back then” was sure he would be partnered with the only woman, and much to his disappointment, he was.

“He was really surprised because she was the first one at the track and the last one to leave, she was a very hard worker,” Quintin explained. Soon, they fell in love and the female mechanic is Alexa’s mother! However, her Grandfather did give her Father one condition before marrying his daughter. “He said: ‘OK, you can marry my daughter if you stop your driving career’ because back then the safety standards weren’t anywhere close to what they are today, and unfortunately a lot of drivers passed away whilst doing what they loved.” Her Father quit racing, but his love for it remained meaning that every Sunday, her whole family would gather to watch the F1 Grand Prix. 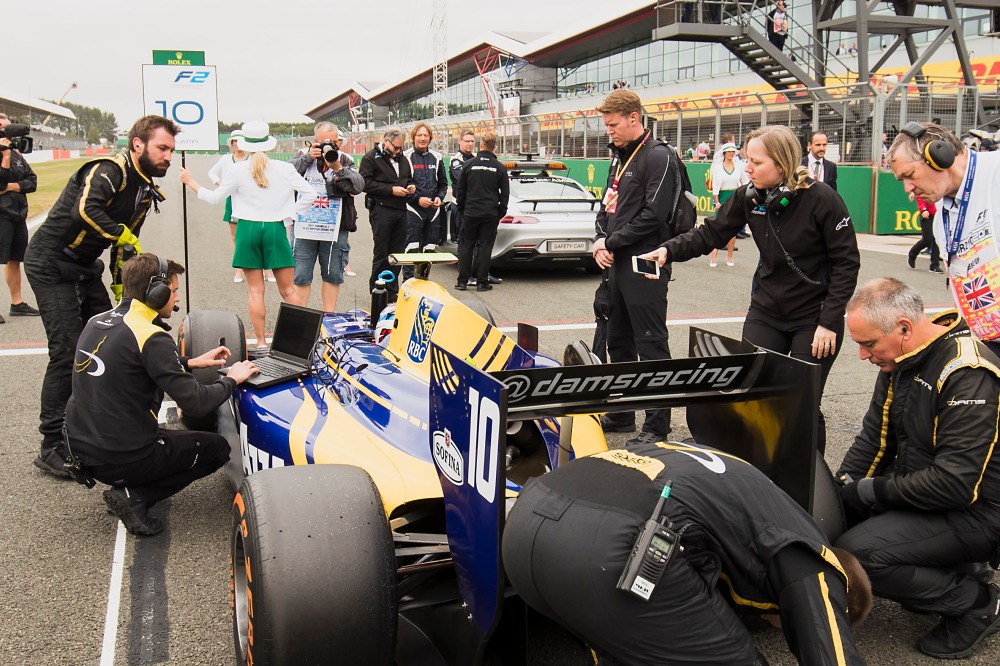 Although her family clearly had a huge love for motorsport, Alexa herself never had any intention to work in the industry. “I wanted to work in the film industry and I started my career in television production. Eventually, I realised that it was not my thing, so I went back to communications which I had studied for and through one of the first jobs I had, I got in touch with someone at Prost Grand Prix,” she said. At the time she worked on a newsletter which featured well known faces. For the January 2000 issue, they wanted Alain Prost, hence why she got in touch with Prost Grand Prix.

Unfortunately, at the time the team didn’t have a press officer and so Prost couldn’t do it. Quintin sent in her CV on the off-chance for the role, but having no experience in the field meant she was unsuccessful. 3 months later, Alexa received a call from Patrizia Spinelli who was Head of Communications for the team and wanted Alexa to work with her on a new project: Prost Design. After the collapse of Prost Grand Prix, she followed Spinelli to Renault F1 and was given the role of press officer for the Renault Driver Development Programme before Spinelli put her name forward for her current role in F2 (GP2).

Working with a junior programme can be extremely rewarding, and for Alexa, working with Renault’s was no different. “It was extremely rewarding, you’re dealing with drivers who are very eager to raise their profile and to learn. You have to build the trust with them. Once you do you can really help them build their image and understand how to answer in an interview and understand that they have to make themselves available, but make sure they don’t give everything away and keep some stuff private,” Quintin explained.

Her role now is Head of Media and Communications for F2 and GP3. Speaking of it she said: “I try to raise their (drivers) profile in a way that benefits both the teams and the drivers and also the Series or the Championship. At the track, you have to make sure all the information is sent through in a timely manner and without any mistakes. We handle the drivers’ appearances and do the interviews for The Insider magazine, the press conferences… I have a million things to do!”

Having worked in the Series since 2008 and since GP3’s creation, Alexa has seen many drivers come and go, but who has impressed her most? “Stoffel Vandoorne for me was the best, the absolute best we’ve ever had. In all the categories, as a driver, as a person, as a professional, he was the absolute best,” she said.

“Nico Hülkenberg was also very impressive; to be honest we are amazed that he’s never scored a podium in F1 yet, it’s a mystery, because in GP2 he was stellar. Also, Romain Grosjean, I have a bit of a soft spot for him because he was in the RDD programme and he’s become a friend of mine. When I think of his driving style he’s got some moves that are absolutely amazing. Last but not least, Charles Leclerc is someone who I was really impressed by and I don’t think I need to tell you that what he achieved first in GP3 and then in F2 is remarkable.”

Talking of GP3, she spoke of 2 Mercedes junior drivers. “We had Esteban Ocon and Luca Ghiotto who were very impressive. They were the same year and battled it out beautifully on track and that was very exciting to see. George Russell this year impressed me quite a lot. The way he built his race to the title was so mature.”

Being part of a lower series means those involved in positions of power, such as Quintin, can become influential in the young driver’s careers. “The best part is when people come back to me and say ‘we can see they’ve been through your training when we interview them’. That makes me proud,” Alexa told me.

Continuing, she said: “I can be a little bit tough on them sometimes and I know I can be annoying and be the person who says you have to smile and put on your cap and take your sunglasses off. I have to say things like I know you’re upset but I need this from you. It’s not always about your performances in the car, you still need to be a presence and be talked about in a positive light.”

In a month or so, the new season will start and Alexa will have a new bunch of drivers to work with, along with some familiar faces from previous seasons. Looking ahead she spoke of who she is most looking forward to working with among the drivers who have already been announced.

“With Prema we have Nyck (de Vries) who showed last year that he definitely has what it takes to be a title contender. Nirei Fukuzimi will race for Arden and I think it will be a learning season for him moving up from GP3. He’s one of the most interesting people in the paddock though, everybody loves Nirei! Obviously, there’s Lando Norris and Sergio Sette Camara at Carlin. Sergio won two races last season so people will be expecting him to fight at the top. As for Lando, everyone will be watching him and I think he will have a lot of pressure on his shoulders, so to see how he will handle that will be very interesting.”

“In GP3, ART have Callum Ilott who did a stint in F2 at Silverstone last year and I must say, he made no mistakes. To come up from F3 at Silverstone, trying to learn the car, the tyres, the strategy, the pitstops, he did pretty well. He will have some competition in his team with former GP3 race winner Jake Hughes. And let’s not forget Anthoine Hubert who ended 4th in 2017 and has announced that his aim is to win the title this season… I believe the fight for the crown will be fierce!”

Having had a successful career, Quintin is the perfect person to offer advice to youngsters aiming for a career in motorsport. “I don’t think you should be defined by your gender, you should be defined by the professional that you are,” she explained, adding: “if you work hard, you’re humble, you listen to the advice that people give you, and always try to improve yourself, that’s what matters.”

Having worked with many young drivers, Alexa Quintin knows how to advise youngsters on how to improve, not only their careers, but themselves. Her advice of focussing on yourself as a professional is a key note to take forward for anyone wanting to work in their dream field.

2 thoughts on “Alexa Quintin: “Stoffel Vandoorne for me was the best, the absolute best we’ve ever had””