Press Officers are crucial in F1 teams, with their roles constantly changing to keep up with new forms of media, such as social media. However, it hasn’t always been this way in the sport, with the occurrence of such press and media jobs only really beginning to be seen in the 1980s. Ann Bradshaw is known as one of the first Press Officers in Formula One, and still works in the sport today. Now she works with Canadian F1 driver Lance Stroll as his personal PR, though still works closely with the Williams team who she spent over 10 years working with in the 80s and 90s. I spoke to her about her career and how her role has changed over the decades.

Ann’s interest in motorsport began at a young age with her family always having a passion for the sport. “My brother did some rallying as an amateur and my parents often went to races. I used to stand at the bottom of our road on the A1 to watch the cars on the Monte Carlo rally go by. This was a long time ago when the rally had starts all round Europe and there was one in Scotland,” she told me. Despite this, Bradshaw didn’t originally intend to work in the industry having wanted to be an actress, but she was discouraged by her parents, which in fact has lead her on to a completely different, yet hugely successful career. “When my parents said it was not sensible, I wanted to be a journalist,” Ann said. 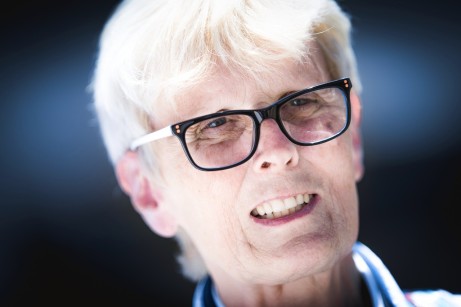 Bradshaw’s first role in motorsport came by chance when a friend of hers who owned the Yardley BRM motorhome called her. “His girlfriend worked in the sport and had gone to see her old boss at the BRSCC (British Racing and Sports Car Club) and he needed someone to work for him. My friend, Roger Hawkins, thought of me and rang to see if I was interested. I went to see Nick Syrett and he offered me the job,” she explained. Ann’s role involved running race meetings, and through this she met many of those working in motorsport journalism. Having already worked as a news journalist, she was able to transfer her skills into a new job.

Being involved in the PR industry was something that Ann admits she “fell into”. CSS Promotions asked her to work for them, helping with the PR for Canon who at the time were sponsoring Williams. This is where her connection and work for Williams started, and lasted nearly 12 years. The role of Press Officers was very different during this time, as it was a relatively new job in the sport. “It was a different world then,” Bradshaw said, “(there were) no computers, no social media, TV was very much just broadcasting the race so no extra crews. There were no organised meetings for media and engineers so it was by the seat of my pants and grabbing drivers when I could. Writing press releases and distributing in the media centre by hand after copying them, then sending out releases afterwards by post.”

After over a decade with the British team and dealing with an array of driving talent from Damon Hill to Ayrton Senna, Nelson Piquet to Nigel Mansell, and admitting not all of them were particularly easy to deal with, Ann moved on to work for a relatively new championship in A1GP. The series was ‘single make’ with Ferrari supplying the engine and being the sole constructor. Drivers represented their home nations rather than a team, with the competition taking place during the F1 winter break. “We had well-known drivers and all different countries,” she told me. “I knew all the media well so it was just a matter of selling a different story. This was one of the most exciting and enjoyable times in my motorsport career. It was mad, but we sort of made up the rules as we went along and it worked. Sadly, the money ran out though.”

After the collapse of the series, Ann went on to do other freelance work before being offered to opportunity to return to working in F1 full-time. She now works with Williams but is employed by the Stroll family as PR for young F1 driver Lance. When the Canadian secured his F1 seat, his father was keen to find someone to cover PR for his son and so asked Claire Williams if she knew anyone who would be suitable. “Claire rang me as his (Stroll’s) father asked her to recommend a PR person who the team would be happy to work with,” Bradshaw described. However, not working for the team can be slightly tricky when it comes to results, with her saying: “there is the problem of you wanting your driver to be quickest in the team. If you work for the team this isn’t a problem!”

Outside of a race-weekend, Ann’s schedule is still extremely busy, and this is what presents her with the greatest challenges. “Just making sure you manage the driver’s time in the best possible way (is a challenge). He can’t do everything he is asked to do outside the car for the media, so it is important to prioritise,” she explained. But the hectic days are all worthwhile when the driver or team being represented achieve a brilliant result. Speaking of the best moments of her career she said: “Suzuka 1996 when Damon Hill won the race and the title was pretty special. Also, last year when Lance was on the podium in Baku was amazing. It is great to see a young driver achieve something like this in his first year.”

Ann Bradshaw is one of the most experienced people working in F1, having been a pioneer for media and press roles within teams. She’s worked in many series and would advise this as a route for others wanting to reach the Formula One. “I always say not to just think of F1 as being the only form of motorsport to work in. I advise anyone to get involved with lower levels as these will give a good grounding. The work is hard so you have to be prepared to put in the hours. It’s not just about the races, it is the build-up, the long nights and also the lows as well as the highs. In my career I have done every form of the sport and loved everything. Formula Ford, sports cars, touring cars, rallying, etc, are just as rewarding as F1.” Her extensive knowledge makes her the perfect person to inspire others and also to represent a young and inexperienced driver in the crazy world of F1.