The World Cup has already thrown up many shocks and stories despite the teams not even having completed the group stages. However, not all of these stories have been about the football and the players themselves, with some people’s attention on those presenting and commentating on the games rather than those competing. This tournament has been one of the most inclusive from a broadcast point of view with people and pundits from all backgrounds, sexes and ethnicities being seen on our screens, but it would appear that even in 2018 this has been far too ‘revolutionary’ for some to deal with.

140 England caps, captaining the team on many of those along with captaining their domestic team. Champion’s League winner. 7-time FA Cup winner with countless more league and cup wins including the Premier League and Community Shield. Surely well-qualified to talk about the game of football? Well, these are not the statistics of Alan Shearer or Frank Lampard or Gary Neville, but Arsenal and England legend Alex Scott. You’d think, looking at her trophy cabinet, people would struggle to criticise her presence at a football tournament when she has so much experience and has been incredibly successful having also finished 3rd at the World Cup in 2015. However, both her and fellow England footballer and multiple league winner Eni Aluko, along with broadcasters Jacqui Oatley and Vicki Sparks have come in for criticism from so-called ‘fans’ who seem to have a problem seeing and hearing women comment of football. 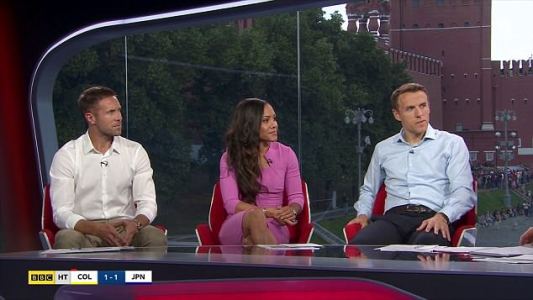 “Not saying that females and football don’t go, but in my opinion this World Cup has been ruined so far (by) female pundits”

“nothing against women but I don’t feel they will have the experience or prospective of the men’s game, or men’s international scene to be making valid points”

Just some of the comments by people who seem to have an issue with females commentating on the men’s game. Some rightly argue that although both football, the 2 games are very different, which is of course correct. They are very different. In one, when you get tackled by an opponent you either stay on your feet or get straight back up, obviously unless injured. Whereas in the other, if another player as much as touches you in anyway, you must throw yourself on the floor in anguish. However, in all seriousness, the basics and fundamentals of the game remain the same with cards being awarded for the same tackles and offences, as well as free-kicks being given for the same situations in both men’s and women’s football.

One person raised the issue of females being unable to make valid points about the international game. The World Cup boasts 32 of the best football teams from around the globe, and with each country bringing at least 20 players each, pundits must have knowledge of over 600 players. Viewers demand of all experts on TV that they have an understanding of each players’ strengths and weaknesses, whether they be male or female. Some may be surprised that certain pundits have such an in-depth knowledge, but it is of course, their job to. However, this didnt apply to former Man United player Patrice Evra, who when appearing alongside both Jacqui Oatley and Eni Aluko, as well as Henrik Larsson, patronisingly clapped Aluko for her knowledge when giving insight on ITV’s coverage of Serbia vs Costa Rica. “I think we should leave Henrik because she knows about more football than us! I’m really impressed, you know. She knows more than us,” the Frenchman said, leaving both former player Aluko and presenter Oatley taken aback. Although Evra has since claimed that they was no notion of sexism involved, he had clearly underestimated her knowledge of the game.

Some people may have a problem with women being seen on football shows, but surely the positive affect this has hugely outweighs this negative opinion. As the sport is so often seen as being male, there remains a stigma around those with an interest in football who are not a stereotypical fan. There is no reason why a man would have more of a right than a woman to enjoy a particular past-time or sport. The beautiful thing about sport is that it is inclusive and brings people together. In recent years we have seen a drive to encourage more young girls to take part and take an interest in activities such as football and by seeing women such as Alex Scott and Eni Aluko on TV talking so eloquently and with so much knowledge about the subject, it helps normalise the association between females and football.

The media side of sport is well-known to be male dominated, and the same applies, the more women we see on screen talking about the sport, the more likely people are to be inspired to consider a similar career. Only when people can see those in such positions can they be inspired by them, and so by having female pundits who are former-players as well as female broadcasters, it gives belief to those who think they may like to pursue that career path that it is possible and that their gender won’t hold them back. Let’s make sure this World Cup is remembered for a generation of young girls finally seeing women represented in football broadcasting and for Vicki Sparks becoming the first woman to commentate for British TV at a FIFA World Cup.

“Alex Scott is smashing at the world cup she clearly does her homework. Paving the way for more female pundits in a sport that is still dominated by men”

“Really excited about #WorldCup2018 because…female commentators and pundits. For y’all who think that it’s a man’s job, please take several seats as I serve you #Feminism. Say no to #misogyny and #sexism in football culture”

“It’s funny reading comments from people saying why do the BBC and ITV have female presenters and pundits. They talk a lot more sense and give a lot more insight”

“Can we get over the whole negativity about female football pundits now?! It’s 2018, females can officially do more than just cooking & cleaning … including even understanding the offside rule @AlexScott is knowledgeable & knows what she’s discussing”

(all photo credits, unless specified, the BBC/ BBC Sport)