The journey to working in motorsport is difficult, especially if you don’t know anyone in the intended area of the industry. The media side of the sport can be the hardest to crack with it being a hugely popular area to work in. It can therefore take many years of extremely hard work and making sacrifices to get there even if you have a contact in the sport. Claire Cottingham has worked in many series of motorsport, as well as working in other sports such as football and cricket. I spoke to her about sleeping on studio floors, working with Jennie Gow, Jack Nicholls and Will Buxton, and always striving for the next goal.

With both her parents being big fans of the sport and her father specialising in motorsport medicine, Claire always had an interest in the F1 and racing, even getting to travel to some events with her father’s job. “When I was younger I was really lucky and got to go to races like Le Mans. I picked up the motorsport bug from both my parents,” she said. Her mother also enjoyed watching and listening to other sports whilst Cottingham grew up, and this has come in useful now with motorsport not the only area she works in. “I work in lots of different sports as well and that side of things came from my Mum,” she added.

With a passion for the sport, Claire always knew that the media side of motorsport was where she wanted to work. However, with both her parents coming from a medical background, she was unsure whether this would be possible. “It was really the unknown,” Cottingham told me, “I had nobody around me to give me that sort of advice and help me get there. I would say that I probably got a bit lost when I was at university as to what the right path was. I did a photography degree, but I wouldn’t change anything ever.” There was no question in Claire’s mind that F1 was always the goal with her saying: “it’s hard to explain how much the sport means and how much broadcasting sport means to me. You have to be driven by passion. When I was at Radio Silverstone, I slept on floors and was woken up by an engine at whatever time the circuit opened. You do what you can for what you love.”

Claire’s persistence and passion were clear to see when she first began volunteering at a local radio station. At the time she was working 3 different jobs and whilst taking part in a tour at the station asked if she could help there. “They said they didn’t do work experience. I said ‘oh Ok that’s fine, I’ll be back on Wednesday see you then’ and they would say ‘no, no, no, we don’t do work experience’. But I still said ‘OK see you next week’. I just kept turning up and making tea and just being around it,” Cottingham explained. After a while, one of the presenters, Rik Scott, suggested she start making demo tapes. He would then listen to them and send her his feedback. When Claire saw that a radio station was starting at Silverstone, she sent over these recordings and was offered a show. “Radio Silverstone was run by 2 wonderful people, Gary Champion and Alan Hyde. Alan gave me my first ever gig, I’d never done a radio show in my life. Alan saw that I also had motorsport interests, and so gave me the Saturday afternoon show,” she said.

Living in Eastbourne, Claire had a long commute to Silverstone and back every weekend and so when she was given a Sunday show too, would sleep on the studio floor! “It’s now that I realise how important that platform was as so many of the names and faces are now coming back up, for example there are loads of commentators that I work with now that I would fill in for between their commentary with my show,” Cottingham explained, “everyone else that I had been at university with were getting proper jobs and I was working in a shop and a pub, I didn’t have a career and I didn’t know if there would be a career. Any sacrifices I had to make were outweighed by how amazing the experiences were.”

After 2 years at Radio Silverstone, Claire decided to leave with the strain of driving hundreds of miles every weekend taking its toll. She secured a job working in London for a broadcast PR agency despite not really knowing what the role would entail. Commuting into Central London every day from Camden and not enjoying the job, Cottingham took a leap of faith. “I just hated every minute of it so I left there and moved back in at the bank of Mum and Dad. I had to look at everything as it was clear something wasn’t working,” she told me. With no money and no job, Claire applied for a broadcast assistant role at BBC Radio Kent. Knowing how difficult it was to get into the BBC and having previously contacted the organisation for other roles, she was hoping this time would be different. After going for the interview, she sat by her phone for 3 days waiting. “On the Friday evening I got the call and got the job, who leaves it until Friday evening!” she said. 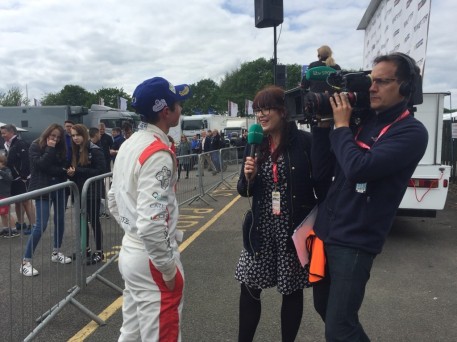 The contract was for 1 day a week, but after only a few weeks, she was at the station fulltime. “They told me they’d chosen me because of all the work I had done at Radio Silverstone and how passionately I had spoken about it. I said: ‘great, well I want to work in your sports department’,” Cottingham explained. Although she didn’t get the move immediately, after working there for 2 years, she became a producer and then a sports reporter. “I loved it,” she said, “I worked on so many different sports, not only did we have Brands Hatch near us, but we had Kent cricket team and lots of non-league football teams.” After working in the sport department for 2 years, again Claire wanted a change. She moved to the digital department, but after not enjoying it as much, took another leap of faith by becoming a freelance reporter. “I had been doing bits here and there with BBC 5 Live and had made contacts within motorsport and the BBC and ITV as at the time I was also doing some work on the British Touring Car championship. When I went freelance, as terrifying as it could have been, I knew I had those contacts. It became a case of emailing every single person I knew,” Claire described.

Cottingham got her first experience of being on TV whilst at the BBC when they allowed her to enter an Autosport competition to find the next face of Motors TV. “I had a go and did a really poor attempt. They said they could tell that there was some talent there so I should go and have another look at the script and come back in 5 minutes. I came back and did it again and won it,” Claire told me. She got to present on the channel, working alongside her broadcasting hero Jennie Gow and now-friend Jack Nicholls. “I presented my first ever TV show and was absolutely terrified. Once I started it was great fun and I really enjoyed it,” she said.

Having always had a passion for F1, it was clear for Claire where she was aiming. Her first experience in the series she’d always dream of came in 2016 when she filled in for Jennie Gow on BBC Radio 5 Live whilst Gow was away working elsewhere. “I had already spoken to the producers and was good friends with Jack (Nicholls) so I knew there was the potential that something might come up. I got an email from one of the producers who said potentially they might need someone for Austria. I tried to be super cool and said I was free and it turned out that my role was the pitlane reporter,” she explained. However, Cottingham nearly missed the opportunity altogether. “I came down with a really horrendous cold a week before, and I don’t get ill often, and I remember sitting doing my research sniffling. It just meant so much but luckily, I began to feel better,” Claire told me. Speaking of her first F1 experience she said: “I remember thinking on the way back that I just ticked off one of my life goals and no one could take that away from me. Sometimes now when I am in the paddock I just go around the back of one of the garages and take a moment and breathe it in and just realise how incredible this life is.”

Claire now also works for the F1 brand alongside people such as Will Buxton and Jason Swales, reporting for their social media and YouTube channels. “It’s a really good time to be in F1 because there are so many changes coming in and so much positivity around it. We’ve got so much fun stuff going on with things like the Twitter Live. All those at F1 are just amazing, Jason and Will have worked together for years so they are just incredible at what they do, as are the rest of the F1 team, they are a great bunch of people,” Cottingham told me.

Although now she is loving what she does, there have been times when Claire has questioned whether it was the right path for her. “You sometimes start to think ‘what am I doing this for?’ ‘maybe that’s just not what I’m going to do’, ‘actually maybe F1 is out of reach for me’. When you get a phone call like that (for Austria) it gives you hope. It’s the little things along the journey that make you think ‘maybe this could really happen’,” Claire explained. With the route to F1 being often long and taking a huge amount of work, it is not surprising that people feel like this and many would give up, but as Cottingham said, sometimes it can be little things that reignite hope. 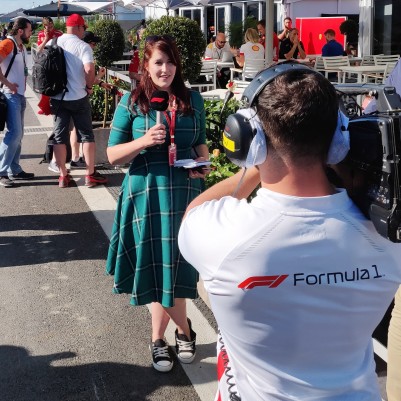 Despite working for ITV, BBC, BT Sport, Formula E Radio and F1 reporting on motorsport, Claire Cottingham say she is no where near the top in her career. Having slept on studio floors, commuted for several hours a day and left jobs she loved to take a leap of faith, it’s fair to say she’s put in the hard work to get to where she is today. Her advice for others wanting to work in the media side of the sport would be: “I took every experience I could and then looked at how I could get to the next step. When I was at Radio Silverstone, I left to work for a PR company, and that probably wasn’t the best choice, but I’d never take it away as it was part of the turnaround for me. My advice would be follow what you think is right at the time, put the hard work in, and contact as many people as you can, networking is massively important. Local radio is also great, it is an incredible way to learn journalism, editorial rules, producing and presenting. Some jobs might not be ideal, but they’re part of the journey. There will always be setbacks, but while you’re on the train, get a free coffee, that’s what I say!”