Motorsport is a huge industry in the USA, with the most notable series including NASCAR and IndyCar. Despite this racing culture, there is a similar issue as with in the UK and Europe in that the industry is hugely male dominated. In 2015, former F1 test driver Susie Wolff launched the ‘Dare to be Different’ initiative in the UK aiming to empower and encourage more women into motorsport, and only 3 years later a similar organisation has been launched in America. Broadcaster, former racer and motorsport-lover Katie Hargitt founded Fuel the Female earlier this year and hopes that the presence of women in motorsport will grow and the stigma will decrease. I spoke to her about Fuel the Female, IndyCar and her advice for those wanting to work in the sport.

Although now Katie has a passion for motorsport before this, she was a keen performer. “My interest in motorsports came when I was about 9-years-old. Before that, I was a dancer. My sister danced with me and my mom coached at the studio where we practiced,” she said. With her father’s love of the sport, Hargitt was regularly dressed up in branded merchandise featuring former NASCAR driver Bill Elliot. “My dad was always a gear head (petrolhead). When I was 9-years-old, he bought my sister and I a quarter midget (kart) to share, so he could spend more time with us on the weekends. That’s the year I was hooked,” Katie explained. 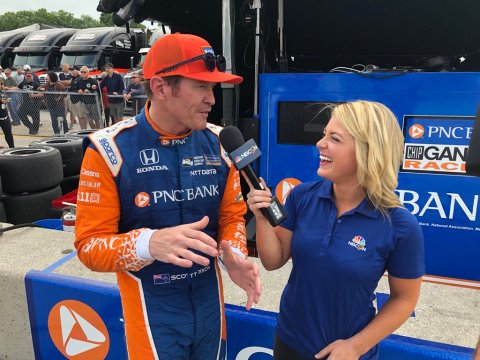 What started as a hobby lead Hargitt to begin competing, with her driving quarter-midget cars until she was 16 and then progressing to larger USAC Midgets. However, she knew her racing career couldn’t continue alongside her education leading her to make a huge decision. “From the time I was hooked on motorsports, I knew my life would never be the same. When I was driving, I had the intention of going professional. When college came around, I knew I had to make a choice. I chose education, but I don’t regret a second of it because it led me to journalism,” she told me. It was then at college that Katie began considering a career in reporting, admitting that it was at this time that her “goal to become a reporter really took shape”. “I was studying journalism and telecommunications. I loved meeting new people and being able to share their unique stories. It allowed me to dive deeper into drivers’ backgrounds, not just their performances on-track. Everyone has a story, it shapes the way you behave each day. I’m fascinated by that,” Katie described.

Whilst still studying, Hargitt knew having ‘real world’ experience would be crucial to eventually securing a job in motorsport journalism. “I had raced for USAC (United States Auto Club) for several years, so I just decided to ask if they needed any extra help at the track,” she said, “Victory lane interviews quickly turned into traveling with the series part-time, including a YouTube series for Indiana Sprint Week.” This work meant she was able to create a demo-reel and a website, showcasing all of her skills and proof of what she could really do. Putting it online, Katie hoped that someone may view it with a possibility of future employment. “Somehow, the staff at IndyCar Radio stumbled upon it and asked me to join them at the IndyCar season opener in St. Petersburg (Florida) in 2013. That was my foot in the door. I met as many people as I could that weekend and soaked in as much information as possible.” Having grabbed the opportunity, she was keen to make the most of it by networking with those there in the hope that she could secure future work. 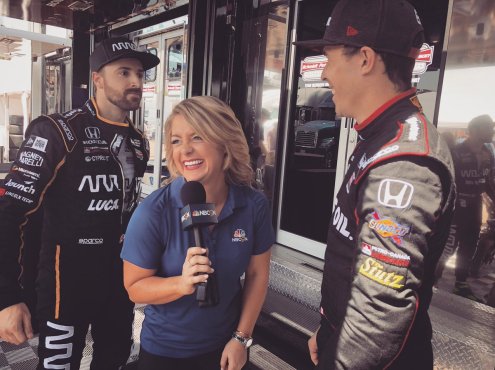 With motorsport media being such a difficult industry to break into, Katie continued working fulltime whilst getting in contact with as many people as possible looking for more opportunities. “In October of 2014, I got the call that there was an opening for an IndyLights pit reporter. That also happened to be the year NBCSN acquired NASCAR. That led to a full season as an IndyLights reporter and partial season with IndyCar,” Hargitt explained.

Now covering both IndyLights and IndyCar for NBC’s Sports channel means race weekends can be very busy for Katie, with her saying: “my current role is pit reporting for NBCSN. That usually requires an IndyLights race show, IndyCar qualifying show and IndyCar race show. I also host a social media segment called ‘Rapid Fire’ that is posted on the NBCSN app and across social media platforms.” However, in a job such as Hargitt’s you can’t just turn up and report with one of the greatest challenges of her role being that she must always be on top of the ‘goings on’ in the sport. “You have to constantly stay one-step ahead. You need to anticipate the next move during the race, anticipate changes in each platform and continue to evolve with how the industry constantly changes,” she explained.

Welcome to #FueltheFemale! We are excited to launch this new adventure with you! What are you doing today to work towards your own dream?! pic.twitter.com/gGbbr8KFYO

Earlier this year Katie founded Fuel the Female and explained how it has been something which she has wanted to do for many years. “Fuel the Female has been a dream of mine for a long time. After living in the motorsports world for 18 years, I’ve seen women in nearly every aspect. I saw a need for resources for women in each of the varied careers. Those resources are anything from mentors to peer-to-peer mentorship, and even just an education. One of the greatest barriers to entry, is just the realization that a woman can do the job,” Hargitt described of her experiences. “Through Fuel the Female, I hope we grow the presence of strong women within motorsports and change the stigma surrounding women in male-dominated sports.”

Despite the initiative being only months old, it has already achieved great success with partners such as tyre manufacturer Firestone and guest speakers at events such as Danica Patrick. Although their progression so far had been impressive, founder Katie is looking forward to the future. “I am pleased with how Fuel the Female is working, but there’s always more work to be done,” she told me, “we still don’t have a full-time female driver in any of the top levels of IndyCar or NASCAR in the U.S. Luckily, women like Courtney Force are succeeding in the top level of NHRA (National Hot Rod Association). We also only have one full-time lead female engineer in the top level, Andrea Mueller at Team Penske in NASCAR. There’s much more room to grow!”

Katie Hargitt is one of the USA’s most well-known motorsport reporters, having spent nearly 2 decades in the industry. As the founder of ‘Fuel the Female’, it is obvious she is keen to encourage more women and girls into roles associated with motorsport and guide those with advice she has gained over her time in the sport. “I repeat this a lot because to this day, I think it’s the best piece of advice I’ve ever received. ‘Be someone that people want to work with.’ To me, that means work hard and be kind. Get to know as many people as you can. Motorsports after all, is a lot about who you know,” Katie advised. With her strong determination which has seen her well throughout her working life, it is surely only a matter of time before Fuel the Female becomes a nationwide, or even worldwide, force for good.