Skip to content
Posted on August 27, 2018 by Georgia Allen

Although football, or soccer, is most commonly associated with Europe and South America, leagues such as the Premier League and La Liga are becoming increasingly popular in the USA. Particularly the Spanish league are hoping to increase their fanbase in North America, something Semra Hunter is keen to get involved with. Born in the USA, she is a native English speaker, however fluent in Spanish, she moved to study in Spain and further her sports broadcasting career. Now working with La Liga International TV, she has previously worked for Real Madrid, and now in her new role is hoping to help raise the profile of Spanish football in her home country. I spoke to her about sport, sharing her passion and moving to Europe to pursue her dream.

Semra’s father was always very athletic meaning she grew up surrounded by sport with him often encouraging her to take up and try out a range of activities. “He already had me out on the slopes on skis when I was about 2 or 3! My love for soccer began when I was 4, and we played what my parents called ‘swarm ball’, since we were too young to play anything that actually resembled real soccer. Basically, all of us kids would just swarm around the ball and move collectively up and down the field. I’m also an only child, so my parents thought it would be really important for me to make friends through sport, which led me to playing a wide variety – soccer, tennis, swimming, ballet, tap dancing, softball, badminton, horseback riding, volleyball…,” Hunter told me. At the age of 10, she began playing volleyball as a hobby, mainly because she enjoyed trying many new sports, however there was soon an opportunity to try out for a local team. “I made the team and it just took off from there,” she said. Semra went on to represent the USA at the Junior Olympics taking volleyball Gold, however a serious accident in her late-teens meant becoming a professional athlete would not be possible.

During a horse-riding lesson, Hunter suffered a severe injury leading to chronic pain and issues with her back. Eventually she had to make the decision not to pursue the career she had dreamed of. “My lifelong dream had been to become a professional athlete, either in football or volleyball,” she explained. “It was really, really heart-breaking for me, and took me several years of exploration to find a new passion. It wasn’t until my Mom and I were watching an NFL game one day, and she mentioned that I would make a great pitch-side reporter. It was one of those lightbulb moments. I thought, ‘that’s brilliant!’ It was the perfect way to marry my two biggest passions – sport and travel – and to also get back into the sports scene on a professional level. So that’s exactly what I did,” Semra told me. 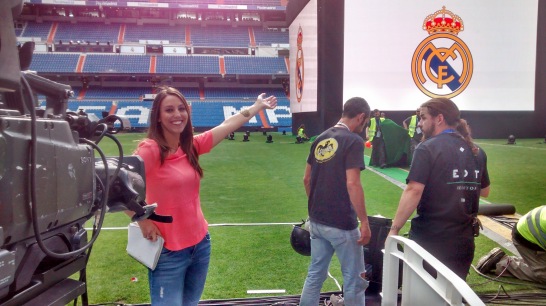 After studying in the US, Hunter moved to Spain to complete her Masters. Although this may seem like a bold decision, with her being fluent in Spanish and a native English speaker, she knew there may be more opportunities for her there. “During my Masters, we made a trip one day to one of the largest production companies in Spain. One of the bosses showed us around for a few hours, and explained to us the behind-the-scenes world of how television works. Once the tour was finished, I stayed behind to talk to him. Our Masters course was coming to an end, so I wanted to get his advice on what possibilities I could have to work in the industry in Spain once I graduated. One thing led to another, and two weeks later, he offered me my first internship with Al-Jazeera Sport. I can’t even put into words how grateful and excited I was with the opportunity! I could hardly believe it was even happening,” Semra said. 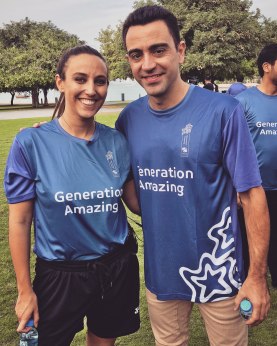 Although she only started as an intern, Hunter was soon given more responsibilities. With her being bilingual, she could act as a link between those in La Liga and the American audience, this meant she could interview players and representatives in their native language and translate and present to English speakers in North America. “We had a 30-minute program about La Liga, mostly about the big boys Real Madrid and Barcelona, that would go out in Spanish. Once I came on board, I would write the scripts for the programs in English for our international audience. But seeing as I was the only native English speaker in the office, I quickly moved into producing segments for our show, and eventually to my first live pitch-side gig for BeIN SPORTS USA. I had only been an intern for about three months at the time, and getting thrown into the deep-end was terrifying! It was one of the last matches of the season, Atlético de Madrid vs Barcelona at the Vicente Calderón. It was just magic, a real dream come true,” she explained. 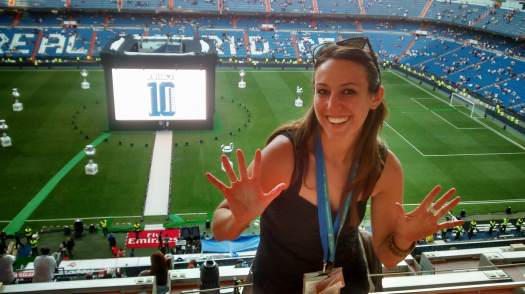 Shortly after this, Semra received a phone call from the boss of Real Madrid’s own TV channel. Her boss at the time had sent her CV to them as they were looking for a reporter. “Their office was just across the road, so we met that same day. He explained to me how they were looking to hire a new presenter and felt that I was a really great fit. I was over the moon! It took about another month or so to finalize, then I left my internship to join the RMTV team on a full-time basis,” Hunter told me. Initially she was writing and editing training pieces and over time began covering press conferences, recording pieces to camera, reporting pitch-side, presenting various studio shows in English and Spanish and conducting post-match interviews with coaches and players. Ahead of the 2015/16 season, she also got to travel on the pre-season tour to Australia and China. “It was, and still is to this day, one of the most incredible and rewarding experiences I’ve ever had the pleasure of taking part in, both personally and professionally,” she said. 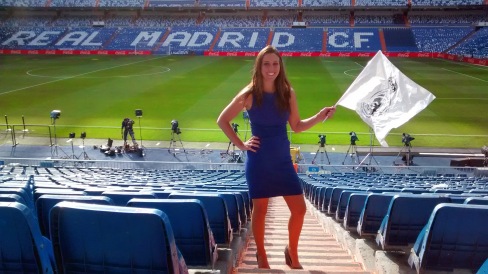 Following her time at RMTV, Hunter moved to Turkey to work with a newly-formed TV channel called TRT World. “I’ve always liked challenges, and this was definitely a big one. The channel was in its infancy when I joined, but it was such a thrill to take what I’d learned at RMTV to then build something brand new. We didn’t have a show, never mind a name for it. It took some time, a lot of trial and error, working and re-working ideas until we finally came up with a daily 30-minute live sports news program called ‘Beyond the Game’,” Semra explained.

Hunter has recently returned to Spain to work on another new project, this time with La Liga TV International. “We’ll be launching in the next few weeks. Similar to TRT World, we’re building it from the ground up. The foundations were laid last season by an excellent group of people, and this campaign is really shaping up to be something special. I don’t want to reveal too much, just yet, so check back in with me in a few weeks,” she told me. Through her newest role, Semra is hoping to share her passion with like-minded people. Speaking about this, she said: “the main objective for now is to share my passion for a sport that I love so dearly with others who feel the same way, and to use that to inspire others to get just as excited as we do when it comes to football, in this case Spanish football. Greater still would be to act as a bridge between Europe and the US to get more people back home hooked on the beautiful game.” 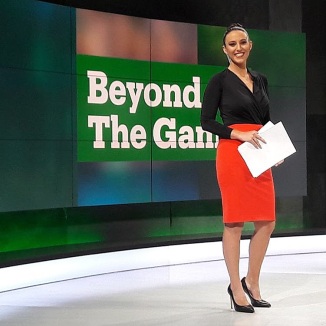 Semra Hunter chose to move from the US to Spain to pursue her dream of working in sports journalism. However, this wasn’t her original desire, wanting to be a professional athlete when she was young. After a serious injury, she had to re-evaluate, deciding if she couldn’t be doing the sport, then reporting would be the next best thing. Speaking of the advice she would give to others wanting to work in the industry, she advised: “just go for it! I came to Spain at a time when the country was deep in crisis, which was reflected in the sports journalism industry, and in journalism in general. I can’t even tell you the amount of working professionals in the industry who would speak to our class, and strongly advise against becoming a journalist, but that only drove me even more. It sounds cliché, but it’s true – believe in yourself, and if you are truly passionate about becoming a journalist, you will make it happen. With the amount of technology and digital platforms available to us, the possibilities are endless. Try to find your niche, work to become the best you can be at it, and eventually, people will come to you.”