Many careers begin out of passion, and for Oana Popoiu, this was absolutely the case. Her love of F1 stemmed from her youth, and despite growing apart from the sport, her interest was reignited as she grew older. Oana started interacting with other fans on online forums in a time before Facebook and Twitter, and this is where her motorsport career began. I spoke to her about how she became a FIA-accredited journalist, interviewing racing stars in the F1 Paddock, and how a change of FIA personnel allowed a new generation of journalists to thrive.

Growing up in Romania, Oana had a mild interest in motorsport, however as she got older, things changed. “I only really ever had an interest in motorsport, other sports just didn’t interest me. My father had taken me to some local races in our town, but as I got older, I had other priorities,” she told me. It was then in her late teens that she rediscovered the sport, particularly Formula One. “I had a group of friends and one Sunday in 1996, I was supposed to meet with them, but one wasn’t coming. We went to pick him up and found out that the reason was because he was watching Formula One. We ended up everyone in his living room waiting for the Spanish Grand Prix to come to an end, and it happened to be Michael Schumacher’s first win for Ferrari. It was raining and the car had no grip, downforce and balance, nobody would’ve thought it would win a GP. I fell in love with F1 immediately! The following season I started watching it as a fan,” Popoiu explained. However, she found it difficult to follow the sport with the country’s sporting focus often on football. “Romania only has one sport and that is football. F1 was not really something you saw a lot on TV and it wasn’t until a few years later that we even started sending commentators to races,” she said. 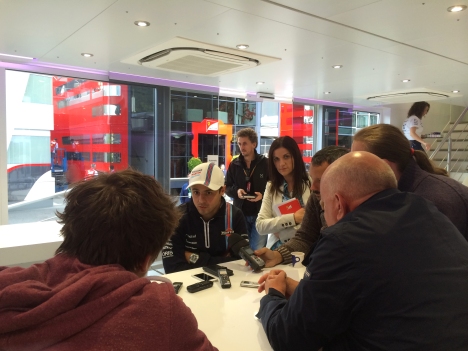 It was Popoiu’s passion that lead to her career in F1, with her original aim to attend a race, with little intentions of anything else. “In the beginning I was just a fan! The financial situation in Romania wasn’t that great. To attend a race, you would have to save up all year,” Oana described. With the sport’s popularity remaining in the shadow of football and wanting to find other fans who she could converse with, she looked to online forums. “I started looking for communities where you could speak with other people with the same interests. This is how I got in touch with F1 Zone. At that time, it was one of the biggest motorsport forums. There was no Facebook or Twitter then, so forums were the only way you could interact,” Oana explained. Although working as a journalist during this time, Popoiu hadn’t considered whether her motorsport passion could be anymore than a weekend interest, until she was approached by F1 Zone. “I was very active on there and one of the administrators contacted me to ask if I would like to be a little more involved because they wanted to start writing more. It was only then that I considered it (being an F1 journalist). I’d never written anything about F1, I was a journalist, but I was writing about criminals and corruption as an investigative journalist,” she told me.

With F1 Zone keen to transition from a forum to a website with more features and articles, Oana began writing about Grands Prix. “Something I am very proud of is how F1 Zone evolved from a forum to a real motorsport website which went on to get accreditation from the FIA. It took a lot of hard work and desire, but eventually it became a real website. I remember once telling my boyfriend that I was going to work in F1 and he just laughed. This only motivated me to go and fight even harder. I knew it was my dream to transform my hobby into a profession,” Popoiu said. It was in 2011 that Oana left Romania and moved to the Netherlands, hoping to use the fresh start to begin focussing on her potential F1 career. “We (F1 Zone) tried to get accreditation and went through a process of sending articles and having my background checked and I finally got my first accreditation for the Belgian Grand Prix in 2012,” she told me, “it soon became serious and really changed from the stage when I was writing stories here and there to it being a job with responsibilities. It wasn’t just about going to the races, but proving yourself to both the publication you work for and the entire F1 Paddock. It’s really challenging, but I think it makes you a better journalist.”

Her first race as an accredited journalist came in 2012 and was a huge success personally with the weekend marking one of her standout moments from her career. “I will always remember my first question in an official Formula One Press Conference. I went to the Thursday pre-race conference with Michael Schumacher one of the drivers. He was my racing idol so I told myself this was my moment and I was going to ask him a question. I didn’t know whether I would ever have the opportunity again, it could’ve been my first and last race! I raised my hand and Matteo Bonciani, Head of F1 Communications for the FIA, saw me. It was my first time there and I really did not expect him to allow me to ask a question, but he did. I asked my question and Michael looked right at me and answered, but in that moment, I didn’t hear anything, it was like time stopped. I then had to go back to the media centre and listen to my recording to find out what he had said,” Oana described.

Although she thoroughly enjoys working for F1 Zone, writing for a small publication can also provide challenges. “Nowadays the fight is even bigger. We reached the point where a lot of small publications were bought by big corporations and now have a huge budget behind them. Last year was actually the first year since I started with F1 Zone that we didn’t have the budget to cover as many races. It does not only affect me though, I have other colleagues who have the same problem. We have suffered with a lack of sponsorship and so we have not been able to attend as many races as we would’ve liked,” Popoiu explained. However, along with the challenges and competition involved in the job, there have also been some unforgettable moments such as the one-to-one exclusive interviews she has done for F1 Zone whilst in the paddock. “I think I pretty much remember every interview I’ve done! I will always remember my first interview in F1 which was with Romain Grosjean. I was so happy to get my first exclusive interview with a F1 driver, I can’t say it was my best though! One of the most emotional interviews was with Daniil Kvyat after he had been demoted from Red Bull to Toro Rosso. It was a heavy time for him so I tried to make sure it wasn’t frustrating and he would enjoy it. That was probably my best interview as it brought a lot of emotion from both my side and his. It’s really important to know how to manage a driver when he is frustrated like that, if you are able to come up with something fun, it can disconnect him from that frustration,” Oana told me.

In 2015, Popoiu’s career took a different turn as she began working as a Press Officer. Following a visit to the then-GP2 paddock, a random conversation led her to become involved in championing a young driver. “I spoke to the owner of one of the teams and we began discussing Romania. They told me about a Romanian girl, Alexandra Marinescu, who had huge talent but didn’t have the budget. The team could see she had potential and so asked me if there was any way I could help her to bring in more sponsors. She had been in a lot of accidents in her racing career, but she had never given up and it only made her stronger. I could tell she was someone who would fight, so we met and tried to make a strategy. I asked journalists to write about her and we hoped sponsors would see that and maybe she would get some more attention, but unfortunately that didn’t happen. A lot of Romanian channels wrote and spoke about her and she received some coverage, but still no-one understood the potential of sponsoring a racing driver,” she described. Although Oana wishes she could’ve done more, her work with Marinescu was hugely rewarding with her remaining involved in the young racer’s career. “It was the first time I was on the other side as I’ve always been the one asking the questions. It was rewarding for me as a press officer to see the increase in coverage. I did my best, and I don’t know what more I could’ve done. It’s maybe one of my biggest regrets that I was not able to do more for her, but with the tools I had at the time, I did more than I even expected. It was great to show the Romanian audience that there is sport outside the world of soccer,” she told me. 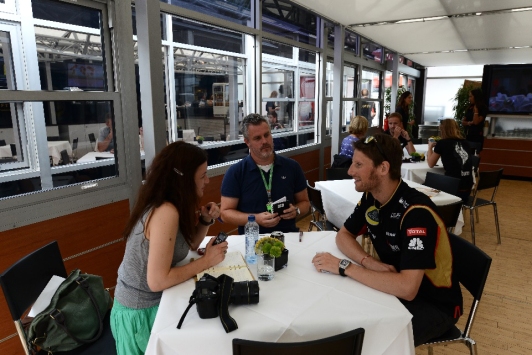 Oana was also keen to speak of those who have supported her, especially following comments from others about the place of women in the sport. “I know how much I have worked, and how much those women are working. If anything, they are working twice as hard as the men as they have to prove themselves. We are as capable as the men are. To read that some think there is a difference in intellectual capacity really shocked me. It’s a very competitive environment, you don’t have space there if you’re not good enough, which means even if you are at the beginning of your career, there is still space for you. Luckily when Matteo Bonciani joined the FIA, it changed things. Thanks to him, there are a lot of women and young journalists now working in F1 with FIA accreditation. He saw that the younger generation needed a chance so he treated everyone the same. For him, it made no difference whether you have 20 years of experience or you’ve just joined,” she said.

Oana Popoiu’s career in motorsport began through her passion, with her role growing from writing on a forum to attending Grands Prix as a FIA-accredited journalist. Despite not coming from a privileged background, working for a small publication and having had many doubters, she forged a career in the F1 paddock. Speaking of the advice she would give to those wanting to work in the sport, she said: “just go for it! It’s an amazing world, but there is a lot to learn. It sounds cliché but never give up. When I got my first accreditation, I thought about the boyfriend who laughed at me and thought ‘I told you so’. I know what I am capable and when I want something, I work hard to get it. The bigger the dream is, the more you have to fight to get there.”