As a pitlane reporter for FIA Formula 2, co-host of the ‘F2: The Road to F1’ podcast, reporter for F1’s live team, and working with Mercedes AMG Petronas F1 team, a race weekend for Rosanna Tennant is never dull. From interviewing the sport’s biggest stars to some of the world’s most famous celebrities, Rosanna must be across stories both motorsport-related and otherwise, not knowing who she may be asked to speak to. I spoke to her about how she started working in the industry, F1 and F2, and working with ‘Dare to be Different’ and ‘F1 in Schools’ to make a difference.

Growing up, motorsport and working in the industry wasn’t something Rosanna had thought about, however journalism was very much on her radar. “I have always been interested in sport but never set out to work in motorsport, that came about more by chance,” she said. “I always wanted to be a journalist, more specifically a newsreader. I wouldn’t stop going on about it when I was at school and university! Obviously, the opportunity with Pole Position took me down a slightly different route but I wouldn’t change what I do now for the world.” Before her move in front of the camera, Tennant’s first role in sport came with work experience at Sky News. Having completed her Masters in Broadcast Journalism, she secured two weeks working with Sky. “Luckily, I was able to extend that to four weeks, changing roles and departments. While I was on the Sky News Sports desk I was sent to a shoot with McLaren and Jenson Button and it was there I met my future boss,” Rosanna told me. Following her work experience, she joined her boss’s sports agency going on to help with sponsorship acquisition and activation as well as PR and marketing across F1, sailing and pro cycling.

After 6 months with the sports agency, Tennant moved to a marketing role with a shoe brand. “This was not part of my plan but looking back it was a great opportunity. I created a content series where we interviewed and filmed friends of the brand, making short form content and writing articles for the website. This helped me practice my interview techniques and my writing skills. After 10 months working there, my old boss rang me to ask if I was still keen on broadcasting as his team had won a contract to run the Google and YouTube funded channel Pole Position but couldn’t find anyone to host it. That’s where the presenting started,” she explained. However, it was not only presenting, as Rosanna also managed social media and some marketing responsibilities. “We created and ran all of the necessary social media platforms for Pole Position and given I was on the ground at races and rallies, I helped manage them. It was also my job to communicate with our community, answering our subscribers’ questions and replying to comments as well as writing a blog for the website. Managing the social media alongside the presenting was an easy balance to strike given I was living and breathing Pole Position,” Tennant described. 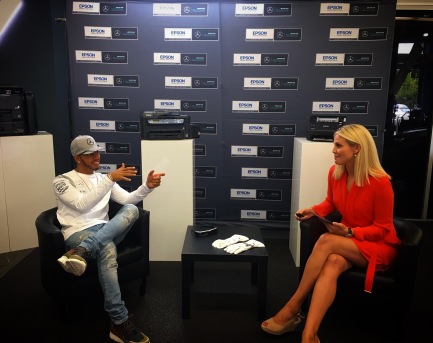 In 2015, Rosanna started working with Mercedes AMG Petronas Motorsport, creating content for their YouTube channel and online platforms. “Mercedes instructed us to start working with them to create short form content around the Team. It made sense given our agency had experience filming in and around Formula 1 – the restrictions are fairly stringent so a good understanding of the environment was key! I have presented videos and live events for the Team and I also work as a producer on the majority of the shoots,” she explained. The following year, Tennant also began working with the team in their hospitality suite in the Paddock Club at Grands Prix where she would interact with fans and answer any questions they may have about races. “This was a fantastic experience, engaging with fans of F1 and explaining the intricacies of the sport,” Tennant told me. However, at the end of the season it became clear that they would no longer need her in this role and so with her desire to continue working in motorsport and broadcasting, she set her sights on a similar role in the sport. 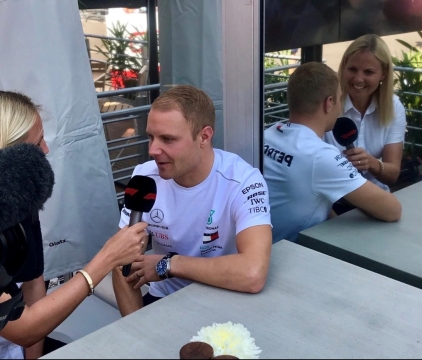 Ahead of the 2017 season, Rosanna began emailing her contacts. “I emailed Formula 1 asking if there might be any upcoming opportunities both on and off screen. Their initial reply was that they ‘didn’t need any more onscreen British talent!’. Of course, I had to reply! I explained that I also spoke French and Spanish and asked if that could be of use to them. They replied and invited me to the 2017 pre-season test to help with interviews and creating content. There was absolutely no guarantee it would lead to more work but I tried my hardest and thankfully they asked me back to the majority of races that season,” Tennant described. However, it isn’t only F1 that keeps her busy on a race weekend with her also having reporting duties with feeder series Formula 2. As a Pitlane Reporter during F2 races and also recording the podcast, both championships keep her busy at the track from Thursday to Sunday. “During both the Feature and Sprint races I interview Team Principals in the Pit Lane to garner information about incidents that have happened during the races. If a driver has crashed out then I try to get a word from them too. At the end of the race, I interview the top three finishers either in Parc Fermé or on the Podium. We have also recently launched the ‘F2: The Road to F1’ podcast so I am also co-hosting that with the fabulous Alex Jacques,” Rosanna explained.

When it comes to a usual Grand Prix weekend, for Tennant there is no such thing! Although there may be no track action on the Thursday, it is then that the work at the circuit begins for those involved in the sport. “Thursday is a recce day, when we test cameras and comms. We also spend Thursday afternoons recording interviews for different episodes (of the podcast),” she said. When the cars take to the track on Friday, the on-screen work begins. “I kick off Formula 1’s Fan TV on Friday morning in the Paddock. This coverage is broadcast around the circuit on the big screens. On Friday afternoons, if my schedule allows, I interview the drivers after FP2 to hear how the two practice sessions have gone. These interviews are then made available to all international broadcasters. On Saturday, if it is an F2 Championship weekend, I will be in the Pit Lane reporting during the Feature Race and I then interview the top three finishers. I also like to get out into the Fan Zone to chat with fans and if there’s a Fan Forum I will host that in the evening. On Sunday, I report from the Pit Lane for the F2 Sprint Race and then I conduct the interviews during the F1 Drivers’ Track Parade. This year we are trying to bring the fans at the track even closer to the action so I do a live Grid Walk which is shown around the circuit. Just before the start of the race I head out to a corner on the track where we think there could be action early on. If a crash does happen it’s my job to interview the driver/s that are out and OK to talk. I then head back to the Paddock so I am ready to interview anyone if something happens further into the race. After the race, I help with media pen interviews and then if it’s a Twitter Show weekend I may be asked to have a chat with Will Buxton. I then pack up and head home!” 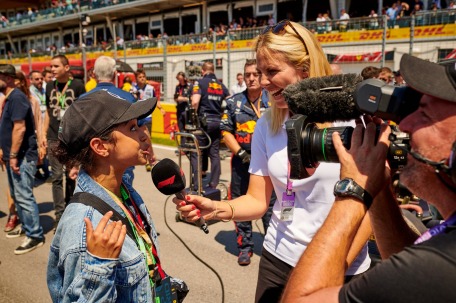 With there being so little spare time at a race weekend and with so many things to do, managing her time and ensuring she is fully prepared are some of the greatest difficulties of Rosanna’s work. “The greatest challenge for me is to ensure I am in the right place at the right time and most importantly that I am ready for every eventuality. I need to be right up to speed on hot topics so that I don’t miss an opportunity to ask drivers, Team Principals or even celebrities important and relevant questions! These are of course a pleasure but also a challenge as you have literally seconds or minutes to get the interview done with very little warning,” she explained. However, some of these interviews have turned out to be highlights of her career, as are working with some of the best racing drivers in the world. “I have been lucky enough to interview some of the legends of the motor racing world. I have also had the privilege of being driven by them! I absolutely love it when celebrities attend an F1 race – I have interviewed the likes of Usain Bolt, Bill Clinton, David Beckham and Will Smith – what a treat,” Tennant exclaimed. 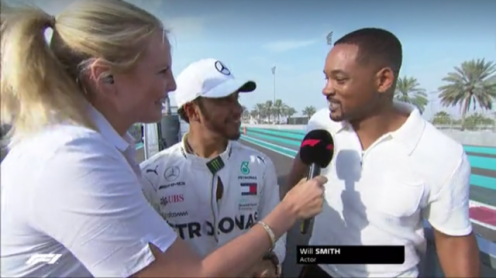 Outside of her media work, Rosanna also spends a lot of her time supporting young people, hoping to inspire them to pursue careers in the motorsport industry. Working with ‘F1 in Schools’ and as an ambassador for ‘Dare to be Different’, Tennant uses both initiatives to inspire. Speaking of the STEM challenge, she said: “I was terrible at Science and Maths at school, it just never clicked. ‘F1 in Schools’ is the most fantastic way of inspiring and encouraging young students to pursue STEM careers and even before they potentially embark on those careers, ‘F1 in Schools’ provides them with the chance to work in teams and dedicate themselves to a project. The children I have met during my time with them have incredible self-discipline and a brilliant work ethic. Somewhere along the way, it has become cool not to want to try hard at school – ‘F1 in Schools’ is helping to change that mentality. The thing that makes me smile most is seeing the pride the students have in what they have achieved.” With Dare to be Different, she uses personal experiences to encourage girls to follow their dreams. “As a 6ft2 woman I quite literally stand out – I am different. At school that was difficult and made me incredibly self-conscious. I am now much better at embracing the fact that I’m different to many other women. I hope that by working with young girls (although I believe that Dare to be Different could also apply to young boys), I will give them confidence to stand tall and believe in themselves so they can go out there and achieve their dreams. The only thing standing in their way should be hard work.”

Having wanted to work in journalism from a young age, it was a work experience placement following her university studies that set Rosanna Tennant on her journey to working in motorsport. From this, she went on to work for Pole Position, before working with the Mercedes AMG Petronas F1 team and Formula One’s live team. Speaking of the advice she would give to others who may want to work in the industry, Rosanna said: “don’t study media as an undergraduate – choose another subject, particularly languages if you have an aptitude for them. Once you have completed your undergraduate degree then consider a Masters in Broadcast Journalism. Get in touch with local news outlets – radio, TV and print/online. When your first big opportunity comes along you need to be able to demonstrate that you can identify a news story.”