With the curtain having fallen on the first season of W Series, we now look to next year. 12 places on the grid have already been filled with those in the top 12 in this year’s drivers’ standings automatically qualifying for 2020. With the selection process taking place later this month to whittle down the applicants to a list of qualifiers who will go on to further tests, one of those with a secured seat is 6th placed Fabienne Wohlwend. I spoke to her about her success with Ferrari, racing in W Series and balancing the motorsport world with that of the banking in her day job.

Fabienne’s first involvement in motorsport came through her family, when her older brother began karting. “My big brother got a go-kart and he convinced me to give it a try as I already loved everything fast and adrenaline related. I gave it a go and I fell in love with racing on my very first laps, I came to the box, opened my visor and told my dad that I wanted a go-kart for my 7th birthday,” she said. Since then, a future in racing became her dream, striving for it with the help of her parents and family. “It was always my dream to become a professional racing driver. In 2016, after 10 years of successful karting, I told my parents that I wanted to make the step into formula racing and try to become professional one day. My parents supported me with two conditions attached: 1. I needed to finish school and 2. I needed a Plan B,” Wohlwend explained. 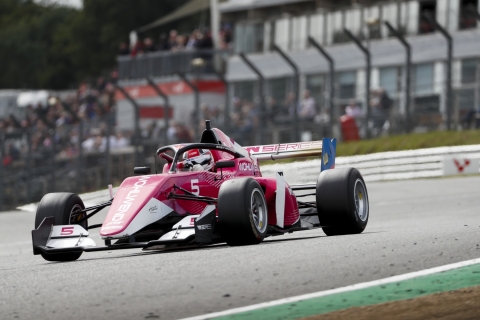 Fabienne had much success in multiple karting series, including winning 2 junior championships in her native Liechtenstein, as well as impressing in Swiss categories. Three year ago, she made the transition to car racing with Italian Formula 4. “In 2016, I made the big step from karting to Formula racing. Racing in the Italian Formula 4 Championship was an amazing experience,” she told me. Although she struggled in her first season of car racing, the following year saw her competing in both the Audi Sport TT Cup and the Ferrari Challenge. With good performances in the Audi-backed series, achieving a best finish of 8th, it was in the Ferrari Challenge where her career really took a step forward. In 6 races, she secured 2 pole positions and 4 podiums, one of which saw her on the top step of the rostrum. With this result she became the first woman to win a race outright for Ferrari. Wohlwend also raced in the end-of-season Finali Mondiali (World Final) where she finished 3rd in the Coppa Shell class. In 2018, she returned to the Ferrari Challenge, finishing 2nd in the championship of the Trofeo Pirelli category, before winning the World Final. After ending the 2018 season on a high, going into 2019 and W Series, this was a big boost to her confidence. “I learned a lot driving different race cars and especially Ferrari Challenge gave me a lot of confidence. Even though I knew that there were a lot of girls with more formula experience, I was convinced that I would be competitive,” Fabienne explained.

Wohlwend’s involvement in W Series came after they shared her story on social media. Speaking about it, she said: “W Series reposted my Instagram post after I was the first female to win the Ferrari World Final in Monza 2018. I texted them back to say thank you and then they asked me if I wanted to apply and of course I did!” The prospects that the series would provide were one of the main attractions for Fabienne. “W Series is a huge opportunity for all female racing drivers. To be able to race with a professional race team such as Hitech and to have a fully paid racing season in a Formula 3 car is just incredible,” she told me. After 2 seasons away from formula cars, returning to this variation of racing car was just another reason that she was attracted to the series. “The car is amazing to drive. I always wanted to race a Formula 3 car after racing Formula 4 in 2016 so a big thank you to W Series for making this dream come true,” Wohlwend said.

Ahead of the season, with her confidence high, Fabienne was hopeful that she could be competitive and show the world her abilities, however with 2 seasons away from formula cars, she knew there would be challenges along the way. “I was confident that I’m one of the fastest female racing drivers but after racing GT cars for the past 2 years, I knew that there would be a lot of things to learn. My goal was to finish in the top 7,” she described. With the season now finished, it’s clear Wohlwend has surpassed her expectations, finishing 6th in the drivers’ standings with 1 pole position and 1 podium. Reflecting on W Series, Wohlwend said: “the season was an absolute blast. I learnt so much not only driving-wise, I feel like I developed myself to a professional racing driver. And of course, with a pole position, 1 podium and 5 out of 6 point finishes I am more than happy with my performance.”

Having finished in the top 12 in the drivers’ championship, Fabienne automatically qualifies for W Series next year. This means she has the assurance of fully-funded racing, surely taking a weight off of her shoulders. “It’s a fantastic feeling,” she said. “It takes a lot of the pressure away and makes the winter preparation a lot easier.” Yet it’s not only racing that is a part of Fabienne’s life with her also juggling her day job working in banking. “I’m used to less free time – to race, work and train at the same time but the past month was extremely intense but absolutely worth it. I worked full time in the Bank between the races to catch up the days and I’ve been juggling 4x (sessions) a week strength and 3x (sessions) per week endurance training with my commitments to W Series, Ferrari and coaching. Not to mention all the travelling in between,” she told me.

Although finding a balance between work, racing and her personal life may have been challenging, all the hard work has paid off with her having been one of the standout performers and securing a seat for next year. Throughout the season there have been many highlights, though for Wohlwend, her return to a circuit she had previously raced at proved to be her most successful weekend. “My season highlight was definitely Misano. I love the track and arrived there with good memories from my double win with Ferrari in 2017. My pole lap was perfect, I nailed every apex, exit, everything was on point – probably the best lap I ever did and then followed by my first podium in a single seater was just unbelievable,” she explained. Having been confident going into the season, but knowing she had a lot to learn with others having had much more single seater and formula car experience than her, Fabienne believes the biggest thing she has learnt from the inaugural season of W Series is “that dedication and hard work is key to success.”

Fabienne Wohlwend has had big dreams since she was young when at the age of 7, she began karting. After 10 years of triumphing in many of both Liechtenstein and Switzerland’s junior championships, she transitioned to car racing where she had her first experience of formula cars with the Italian Formula 4 Championship. The following 2 seasons were spent mainly competing in the Ferrari Challenge in which she has achieved multiple pole positions, wins and podiums. Off the back of her victory in the Finali Mondiali in the Pro-Am class at the end of 2018, she was approached by W Series, since going on to make it through both selection processes and compete in all 6 of the series’ championship races. Having secured a place for next season, she is looking to the future. She also spoke of her advice for any young driver looking to be a part of the motorsport world. “Fight for your dreams and never give up. Don’t let a bad moment, race, year destroy your future. Everyone goes through difficulties in their lives and they should make you go for it even more. Keep a positive mind set and be patient,” Fabienne explained. With her aim of improving on this year’s results, we can only expect next year to be bigger and better for the young driver from Liechtenstein.

One thought on “Fabienne Wohlwend: “dedication and hard work is key to success””