Skip to content
Posted on October 10, 2019 by Georgia Allen

There are many roles behind the scenes in elite sport that are vital to overall performance. In the world of motorsport, it is not only the drivers that must be at the top of their game, with team members such as those in the pit crew also playing a crucial role. Working with Haas F1 to ensure their team are in top-form is their performance physiotherapist Faith Atack-Martin. Having also worked with W Series this season and specialising in veterinary physiotherapy, Faith told me about her varied career and using the Hintsa philosophy to better the lives of both her clients and herself.

Whilst at school, fitness and performance were interests for Faith, though weren’t industries she had thought about working in. “I had other ideas about what I wanted to do but I was always interested in sport and performance,” she said. “I think my year group at school were the first to have the option of PE as a GCSE and it was then that I became interested in the human body, health and wellbeing. I was a showjumper through school and that’s all I wanted to do.” Following her education, she was keen to pursue a career in the equestrian world, leaving home to train and ride for various owners. After meeting a veterinary physio who had come to treat some of the horses, Atack-Martin was introduced to a new role that she felt would suit her. “After watching her work and seeing the improvement, I decided to go back to college and pursue physiotherapy. In Britain, it is a protected title for human practice so to become a veterinary physiotherapist you have to train and qualify on people first. I was offered a place at the University of Huddersfield for a three-year Physiotherapy degree and I loved it. Following my graduation, I enrolled at the Royal Veterinary College in London for a part time Post Graduate Diploma in Veterinary Physiotherapy,” she explained. 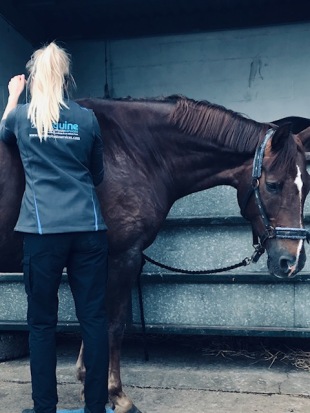 After graduating, Faith secured work experience at Leeds United Football Club with 6 months of unpaid work, before she was subsequently offered her first full-time position. “My first role was working for the Academy. It was a dream come true to work in such an elite setting. We had a great team of doctors, physios and sport scientists and every day was a learning curve. I was there for 5 years and worked up to the role of Head of Sports Science and Medicine for the Academy,” Atack-Martin told me. As a former competitive athlete, it seemed only natural that she would go onto use her skills in the field, with Faith keen to remain involved in sport, even if she wasn’t the one competing. “For me, working in elite sport is definitely the next best thing to being an athlete which was my original ambition. I’d always prefer to be behind the scenes or competing myself. Working in elite sport fulfils that for me and its very rewarding when the people you’re working with perform well because of your efforts,” she said. Although initially working with people, Atack-Martin now juggles both humans and horses, and it seems for her, there are huge similarities. “Physiologically, horses and humans are very similar when it comes to the demands of athletic performance. Horses don’t choose a life of competition so we owe it to them to optimise their fitness and conditioning. It’s very rewarding to see them improve,” she said.

Last year, Faith began working with the highly-respected Hintsa Performance. Famed for their work with some of the world’s most successful racing drivers, their performance coaching is bespoke to each athlete. “I was recruited by Hintsa in 2018 following a rigorous recruitment process that involved a fascinating week in Finland learning about the company and its philosophy. The whole process was inspiring and I was lucky enough to meet some amazing people,” she told me. After joining the family, Atack-Martin was assigned to Haas F1 team along with Baptiste Bardey, with whom she shares the role. “Baptiste is a Strength and Conditioning Coach who filled a similar role at Mercedes AMG-Petronas F1 before moving to Haas. Together we deliver the Health and Wellbeing Programme for the race team and support them in our individual roles,” Faith described. 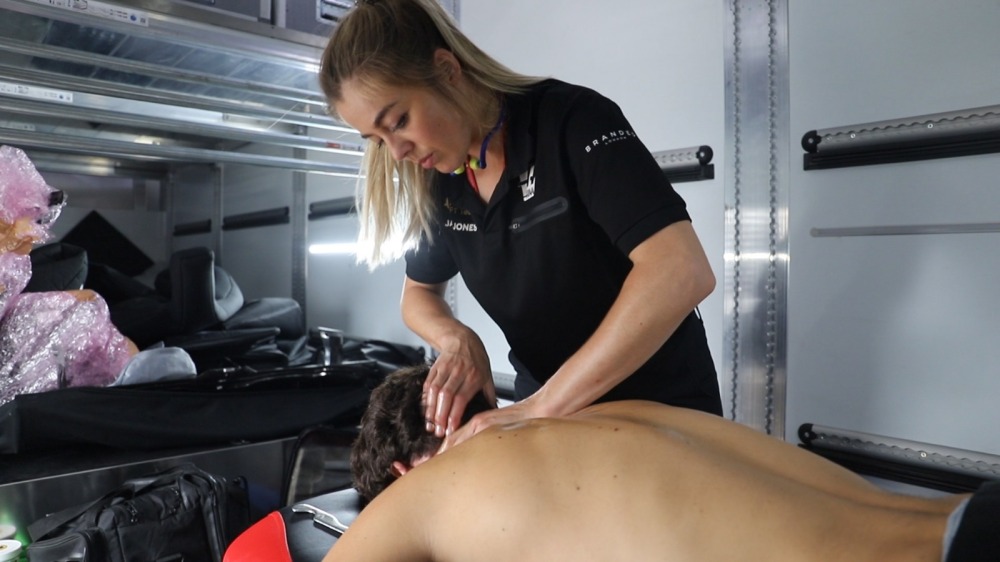 Atack-Martin’s role as a performance physiotherapist begins the same way, no matter who she is working with. “My role starts with a screening process. This involves observing how the driver or race team member moves and obtaining a medical history. This allows me to see if an individual is at risk of injury or has a pre-existing problem that I need to manage – it’s about being as proactive as possible as prevention is always better than cure,” she said. During the week leading up to a race, it is important that Faith can help improve pain or symptoms for Haas’s employees. “It’s essential for that individual to carry out their duties and perform. I then prescribe a lot of corrective and strengthening exercises for longer term improvement. My role at Haas F1 is based both at races and also at the factory where we have a gym, providing a perfect environment for rehabilitation work,” Faith explained.

Yet, it’s not only physical aspects that her Hintsa training focuses on. “Performance is dependable on so many other factors that we need to optimise,” she said. “At Hintsa we use ‘The Circle of Better Life’. As well as looking at physical activity and the biomechanics of an individual, we also use strategies to improve sleep, nutrition, mental energy and general health. For the fly-away races that cross many time zones, we utilise jet lag plans that allow the guys to adjust their sleep habits in anticipation of the time zone ahead,” Atack-Martin told me. When it comes to a race weekend, it is all about optimising performance, with Faith saying: “this includes improving the physical performance of the pit stops and management of injuries and chronic issues. Hydration is also crucial, especially in hotter climates so I make sure the guys are drinking regularly by monitoring their water intake. Using electrolyte and hydration tablets helps this further and the aim is to reduce soda and sugar intake. Many of the team are improving their nutritional choices and so I work one to one with them to support this. Organising physical activities for the team away from the track can help both their physical and mental wellbeing too. I aim to organise 2-3 activities per race week, such as 5 a side football, karting and climbing. Finally, I am there as support. The race season is long and often very intense. If I can be a sounding board or a confidante as well as a physio then I am fulfilling my role.”

But F1 is not the only series of motorsport that Faith has been working in with her being part of a 3-person team of performance coaches working in W Series. “This was a very different role as I was working solely with the W Series drivers. As with Haas, we used screening processes and looked at all aspects of the drivers’ fitness and wellbeing prior to the race series. The role was shared with Hintsa performance coaches Sarah Harrington and Christian Vassello who used a smartphone app to communicate training sessions to the drivers and I took care of injury prevention and management. Identifying and managing the specific physiological demands that the drivers face in the car was the biggest difference. It was fascinating to realise how physical the races were. Overall, it has been a very special series, the first of its kind and a pleasure to be a part of,” she explained. 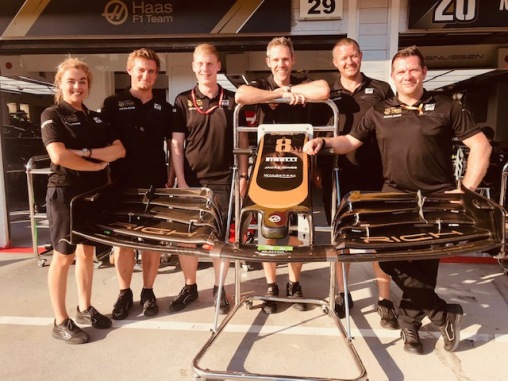 With F1, W Series and her work with her company ‘Equine Physio Services’, planning and organisation are key for Atack-Martin. “I know in advance when I’ll be at a race, travelling or at the factory, so those dates are the first to go in the diary. I then plan my equine clients in to the days that I’m at home. The Hintsa philosophy has taught me a lot about making time for what is important. The danger of loving what you do is that it can take over. In the past, I’ve often tried to ‘burn the candle at both ends’. This leaves you tired and unproductive,” she said. However, this isn’t the only challenge Faith faces in her role, with her adding: “in the first half of the season at Haas Formula 1, the time I had at the factory and at races was very sporadic so it was difficult to build relationships. It felt like I wasn’t on top of the role for some time but the programme now is well underway and has been met with a lot of positivity. Another challenge is juggling the day to day work while continuing to professionally develop as a physiotherapist. I will often use travel time to do this, sourcing educational podcasts and reading material to keep learning while on a flight.”

Although she has not spent long working in motorsport, it has already been an unforgettable experience. “Being part of the first W Series and observing the changing attitudes towards it has been such a unique experience. There was a lot of criticism at first but as the series progressed, people have realised the opportunity and attention it creates around females in motorsport. The moment that Megan Gilkes and Alice Powell crossed the line in an almost photo finish in Assen for the non-championship reverse grid race was a standout moment that I will never forget,” Atack-Martin described.

Faith Atack-Martin’s role is surely one of the most important behind the scenes in motorsport. With her aiming to improve wellbeing both physically and mentally, she is a support to those working with Haas F1 team both on and off-track. Speaking of her advice for others who want to work in the industry, she said: “I think it’s incredibly important to have a few great mentors early on in your career who can help to guide you. I had that at Leeds United and many colleagues would say the same. You also need to be prepared to work long hours and long days for often little reward financially, in any environment of sport you can. Opportunities can present themselves in all sorts of environments and sometimes it’s a case of right place, right time. Finally, I would say be kind and self-aware. The best practitioners I have met have also been good people who can get the best from their athletes.”