The world of motorsport encompasses many forms of racing, whether it be on 2-wheels or 4. Not many people work in both industries, but Guenaelle Longy is one of the few who do. Having covered MotoGP, Le Mans and the inaugural FIA Motorsport Games, I spoke to her about her career in motorsport, achieving her dream, and advice for anyone wanting to work in the sport.

Like many, sport has been an interest for Guenaelle since she was young. Growing up, her Grandfather was a fan of all sports but her involvement in motorsport came when she was a little older. “When I was a kid, I spent a lot of time with my grandparents after school and during holidays. My grandad watched a lot of sport on TV, especially during the Olympics and so did I. The passion for motorsport came when I met my first boyfriend at the age of 17. He was a motocross rider and I naturally became very curious about the sport. From the first time I went to a motocross track and watched a race, I knew that I’d love to work in the industry,” she told me. However, it wasn’t just sport that Longy was interested in, with her having wanted to work in journalism since she was 8 years old. “When I was 8, I was watching the news on TV with my mum and suddenly I told her ‘that’s the job I wanna do when I grow up’. Since then, I did everything possible to make it real,” Guenaelle said.

Being surrounded by professional sportspeople in the world of motocross, Longy became interested in the details of sports which left her fascinated and with the longing for greater understanding. “Being in contact with sportsmen and women, understanding how they prepare themselves physically and mentally, find the motivation, deal with their doubts/concerns to reach their goals has always been my main quest as long as I can remember,” she explained. Guenaelle’s first role in motorsport was somewhat an unofficial one as she became a volunteer motocross rider’s helper for her then-boyfriend, with her saying: (I was) girlfriend back home, but definitely helper at the tracks!” Though not paid work, this did help Longy to immerse herself in the sport, allowing her to discover all the roles and the human aspect of such a high-pressure environment. “I learned everything about the sport: how to train on and off the bike, how to set up a bike, how to be a good pit board crew, what to cook/eat when you’re an athlete and how to deal with good and bad times,” she said. However, when it comes to her first role as a reporter, that came with her covering 2 French series. “My first motorsport role as a professional was back in 2004. I started as a motorsport reporter at Motors TV. I was covering the French Superbike and French Supermoto Championships, and that’s where I really learned my job,” Guenaelle told me. 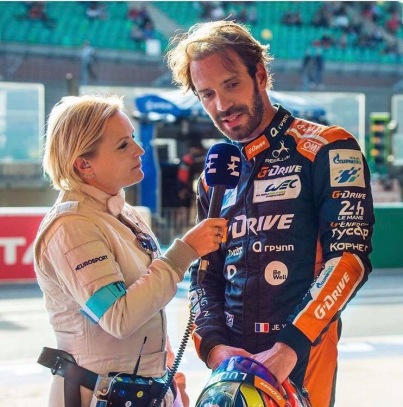 A year later, Longy was approached by Renault Sport who hired her as a Pit Reporter for the World Series by Renault and also TV magazine Chief Editor. With her gaining experience, she began to attract attention from other series interested in her being a part of their team. “I was a busy young reporter starting to have a strong professional network and one day I got a call from a colleague who had just taken over the production of the MotoGP program for Eurosport France. He wanted to completely renew the show and asked me for a casting. I was chosen to host the MotoGP show from March 2013 onwards. This studio show experience lasted 2 years and then I switched to the FIM EWC to become the World Feed Pit Reporter,” she explained. It was whilst Guenaelle was at Eurosport France that she also got involved with the world famous Le Mans 24Hrs. “That was a wish, a dream for a very long time,” she said. “I knew everything about that race so I had to go for it. I just went and saw my boss and said ‘I want to do it’ and he agreed!”

No race weekend is ever the same for Longy, with her having different jobs in various series. “Every event is different so every weekend is as well. We usually travel on Wednesdays or Thursdays and start with production meetings, live feed meetings etc. Then the biggest part of my preparation is to go and chat with the teams and riders/drivers and collect as much information as possible. Then I work on figures and data, and prepare some notes, this is true whatever my job will be: producer, presenter, commentator, speaker or pit reporter. That’s what I love about my job. Every day is different, every race is different, every mission is different,” she said. However, Guenaelle’s main roles tend to be either as a Pit Reporter or a Show Host and so with this can come different approaches. “I would say that the Pit Reporter role is much more connected to human relationships. You’re embedded into the action, into the teams. You live the race next to them, you have to go through the good times and bad times with them. When you’re a Show Host, most of the time you’re a bit further away from the action. It can be compared to a Master of Ceremonies. You have to define which topics will come up in the show, what will be analysed, which expert will be questioned, and then when you’re on air you’re mainly the one who gives the floor to the guests. Being a Pit Reporter is more of an action job while being a Show Host is more of a reflection job,” she described.

Guenaelle has also hosted the all-important drivers’ press conference for the World Endurance Championship, European Le Mans Series, and the Le Mans 24hrs. “I have known people from the ACO (Automobile Club de l’Ouest, organisers of Le Mans) for years since I have been going to the track several times a year since 2004. I started as Eurosport France’s Le Mans 24h Pit Reporter in 2013 and the next winter, the ACO offered me the role of host of the WEC/ELMS/24H Press conferences. In this industry, it’s mainly about network and opportunities. That’s how I became the Formula-E 2019 Paris E-Prix main host and WRC Tour de Corse official speaker last year as well. I’m very proud to work with such prestigious organizations,” Longy told me.

Last year, there was a new role for Guenaelle, with the inaugural FIA Motorsport Games. The competition pitted countries against each other with 6 different motorsport disciplines covered with categories such as the GT Cup and Formula 4 Cup. Longy was a commentator for the new competition, commentating on nearly 24 hours of coverage. “I’ve been commentating on racing for years but this one was a proper challenge as we commentated on 23 hours of live racing in 2 days. It was really exciting to commentate on the first edition of the unique event and discover some new sports like drifting and sim racing. I’d love to do it again this year,” she said. With Longy’s work covering both cars and motorcycles, on occasions she may have to adapt to the different environments, however, what makes her a good journalist is she maintains her professional, yet empathetic nature in which ever series she may be working in. “I’m one of the rare journalists who works on both 4-wheel and 2-wheel racing. I love mixing because this is very enriching. The philosophy of those sports are quite different and their riders/drivers as well, but my approach and my behaviour as a journalist is pretty much the same. I’m very empathic and sensitive so I adapt to most of the situations and personalities,” she explained.

When it comes to the challenges of her work, it’s dealing with whatever is thrown at her that can be one of the biggest difficulties for Guenaelle. “Dealing with the pressure, keeping a cool head to be able to make the good choices, and be able to talk to the camera while someone is talking to you in your earphone in a foreign language,” Longy described. With so many highlights in her career, it’s near impossible for her to pick just one moment that has been the greatest. “The entire journey so far has been amazing,” she said. “Having the opportunity to spread the emotion that we can feel on a starting grid, during a race or at the winners’ enclosure to the viewers is so rewarding and satisfying. I’ve done tons of interviews but there’s no one I could pick more than another. I would say that the highlight of my career so far is the trust that I’ve been given for 15 years to be a vector of emotion. That’s what I love most about my job: feeling and spreading great emotions.”

Guenaelle Longy has been working in the motorsport industry for over 15 years. Having immersed herself in all aspects of the sport as a teenager, she began to understand how the roles behind the scenes worked and the human emotion involved in such a fast-paced world. As her experience has grown, so has the list of roles she has had with many keen to have her onboard. Guenaelle’s advice to anyone looking at following in her footsteps would be: “be a hard worker which means that you need to be curious of everything and try to understand, analyse everything about the sport you like. That’s a state of mind more than an attitude. You need to build up your credibility. Only work pays off!”