Motorsport can be incredibly challenging, both physically and mentally, however it can be even more challenging when you have a health condition that affects your everyday life. Italian rally driver Rachele Somaschini has suffered from Cystic Fibrosis since she was born, though doesn’t let this hold her back as she continues on her motorsport journey. 2020 will hopefully see her competing in the European Rally Championship with her hoping to raise awareness for her ‘#CorrerePerUnRespiro’ campaign. I spoke to her about her racing career and her aim to find a cure for Cystic Fibrosis.

Rachele has been involved in sport from a young age, taking part in a range of activities as she grew up, including motorsport. “I have always been a very sporty girl, I have done a lot of sports during my life like horse-riding, volleyball, artistic gymnastics, swimming and tennis. Motorsport has been a part of my life since I was a child. My father used to be a driver in circuit competitions, so I grew up between tracks and with cars,” she said. After being introduced to the sport by her father, it was only right that she also made her racing debut alongside him. “I got involved in racing in 2013, at the Autodromo Nationale Monza. My first race was together with my father in the InterEuropa Cup, driving a 1956 Alfa Romeo Giulietta Sprint Veloce. Beautiful memories,” she explained.

After taking part in various events in the Italian Mountain Speed Championship in both 2014 and 2015, in 2016, Rachele competed in her first full season in a championship. “I contested my first championship in CIVM (Italian Hillclimb Championship), driving a MINI Cooper S around the beautiful Italian landscapes and uphill course. The same year I also raced in the MINI Challenge mono-branded Trophy,” she told me. Rachele’s involvement in hillclimb racing began when she decided to hire a car and take part. “Everything started with hiring a Citroen Saxo N2 for the longest European hillclimb track called Trento Bondone. I enjoyed the environment and the warmth of fans and also the discipline and the rush of adrenaline that I had never felt before. Since then, I’ve continued with a family team, owned by me and my father, called RS Team,” she said. 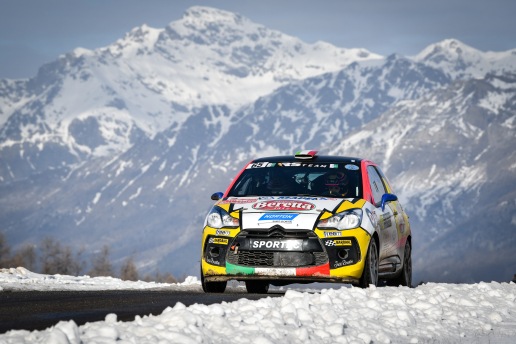 As mentioned, the Italian driver has also raced on circuits, competing in the 2016 MINI Challenge. “Like for hillclimb racing, everything started with my family team,” she explained. “We owned the new model of Mini Cooper JCW, the track edition, that allowed us to race at some of the most famous Italian tracks, like Mugello, Monza, Imola and Vallelunga.” With this being her debut season in track racing, she was pleased to achieve her first win towards the end of the year. Having had experience in racing both on circuits and off, Rachele finds there are both similarities and differences in the ways she approaches these races. “Hillclimbs and circuit racing have a similar way to learn the track: they require absolute accuracy. Knowing every braking point. You have to be very meticulous about every detail, using precision and commitment which is totally different from rallies,” she described.

2017 saw Rachele continue to succeed in hillclimbing as she won the Italian Hillclimb Championship. In the same year she also qualified as a Safe Driving Instructor, something which has helped her understanding when it comes to racing. However, her career in rallying also took a step forward in 2017. “I was selected for a tyre manufacturer’s Young-Project called ‘Plus Rally Academy’, that helped me to grow during the entire season so I could take part in the whole Italian Rally Championship in 2018. It was a very tough experience for me, because of the big difference from the previous disciplines. The hardest part was the presence of the co-driver: another person sitting next to me, her voice talking loudly inside my helmet and also the pace notes method,” the Italian said.

Though rallying wasn’t something that came completely naturally to her, with Rachele having to adapt her driving to suit the motorsport series she is racing in. “It took some time for me to adapt to rallying: a lot of dirty roads, how to cut the curves and driving fast by relying on pace notes and directions. Probably my experience as a safe-driving instructor, that forces me to switch my driving style quite often, helped me to deal with this issue,” she said.

After completing a full season in the Italian Rally Championship in 2018, she returned to the series the following year with much success. Alongside co-driver Chiara Lombardi, Rachele won the Women’s Cup in the championship, though being the best female driver has never been her aim. “It wasn’t one of my first targets, but it was a good satisfaction! I work hard to compete against adversaries, regardless of gender,” she explained. This year, her racing career will take another step forward as she enters the European Rally Championship (though this is dependent on the global situation), something she has dreamed of doing for a long time. However, it isn’t just the driving that is important for Rachele with her hoping to raise awareness for a cause close to her heart. “I really can’t wait to live this new experience, in order to improve my skills and prove my pace at a higher level of competition, in an international environment. It’s a dream come true,” she said. “Secondly but no less important, I wish to make my #CorrerePerUnRespiro (Run for a breath) initiative known across the borders. This is a campaign to raise awareness of Cystic Fibrosis, a condition I have been struggling with since my birth, in order to support research. I hope that we all can sort out the Coronavirus emergency soon and go back to our lives.”

Cystic Fibrosis is a genetic condition that is thought to affect over 70,000 people worldwide. The disease causes a build-up of mucus in the lungs, blocking airways and therefore restricting breathing. This mucus also traps bacteria which can cause reoccurring infections and inflammation in the lungs which is why it is incredibly important that those with Cystic Fibrosis take extra precautions to avoid harmful viruses and bacteria. Although having CF can make Rachele’s racing more difficult, she doesn’t let it stop her doing what she loves. “It’s quite hard for me considering that during each rally the routine is really demanding and that I have about 3 to 4 hours of respiratory exercises and physiotherapies to do every day of my life. The biggest problem is the heat: inside the car and also in summer. People affected by Cystic Fibrosis have very thick sweat that can cause a risk of dehydration. But, it’s my passion, I take it as it is, and I always try to do my best,” she said.

With this her debut season in the European Rally Championship, Rachele is hoping her involvement and her campaign ‘#CorrerePerUnRespiro’ will help raise awareness of her condition and the effects it has on many people. The Championship’s staff are also keen to help support this and have encouraged her to continue to share her message. “The ERC staff were very kind and helpful towards the campaign, proposing many initiatives and ideas during the season to raise awareness and gathering contributions for the scientific research. Cystic Fibrosis is a disease that affects over 70,000 people in the world and there are too many ‘carriers’ without any symptoms that could have a child with Cystic Fibrosis. For this reason, it is important to make the disease known as much as we can: the ultimate goal of the project #CorrerePerUnRespiro is just that, and to find the cure for Cystic Fibrosis sufferers,” the Italian driver told me.

Despite the difficulties she has faced, and continues to face in her racing career, there have been many highlights. Speaking of such experiences Rachele said: “I feel the best moment of my career was my victory in the MINI Challenge Cooper S Trophy in October 2016, at the end of my debut season on the track. This is not due to the win in itself, but thanks to the fact that I was given the trophy by Alex Zanardi, my hero as a driver and as an example of strength. Another special, even if painful, moment was when I managed to get to the finish of a rally despite having suffered a shoulder sprain. It happened during the third to last race of the season in 2019 before winning the Lady and R3 Class Trophy.”

Rachele Somaschini is a brilliant example of overcoming adversity and following her passion. Although her condition may make things a little more difficult, she doesn’t let this stop her from doing what she loves as she strives forward in her racing career. When it comes to the advice she would give to others, she explained: “my advice is to keep trying and you must believe in yourself, especially at the beginning as it is very difficult to start without anyone that helps you. It’s important to identify some friends, family members or sponsors that can support you. Your job is to give everything you have to prove your worth.”

You can find out more about Rachele’s charity work below: