With Formula One being broadcast from over 20 different countries around the world, there is a huge amount of organising behind the scenes to make sure all those both in front and behind the camera are in the right place, at the right time. Georgia Constantinou is Sky Sports F1’s Production Coordinator meaning she is responsible for the team’s international travel, logistics and production admin. I spoke to her about working in sport, logistics and the challenges of her role.

Although Georgia’s interest in sport began when she was a child, this interest didn’t extend much further than watching F1 on TV, with little to no-intention to work in the industry until she was much older. “I’ve always said if you’d told me at university that I’d end up working in sport, I’d have laughed at you. I’ve always watched Formula One, but other than the occasional Tottenham football match, I’m not much of a sports fan,” she said. “I accidentally fell into sport production, but now I work in it, I think it would be tough to move elsewhere in the industry. It’s such a fast-paced environment with the excitement of live production at the very heart of it, not many other genres offer that.” It was whilst she was studying at Southampton Solent University for a BA in Television and Video Production that Georgia began thinking about what role she would go onto work in. “It was only when I was assigned to coordinate a studio show that I found out being organised was an actual job role I could consider. I loved it and it was like a switch flicking in my brain, there was nothing else I wanted to do from that moment,” the Production Coordinator explained. 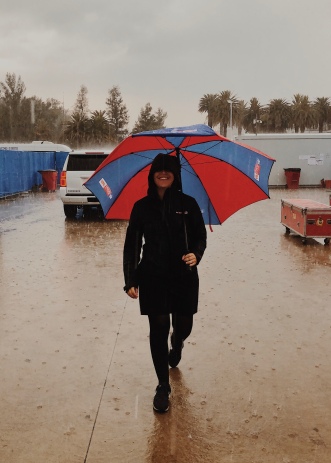 During her course, Georgia was a part of the university’s in-house production company, Solent Productions, where she gained valuable work experience, later going on to work at the company following her graduation. “They happened to be expanding around the same time I finished my course, so I managed to secure a role as a Production Assistant, and approximately eight months later moved up to Production Coordinator. Whilst there, I worked on coordinating the outside broadcast stage coverage on some UK festivals such as Glastonbury and Boardmasters, which eventually led to my first live TV job at Arena Television. I worked on further outside broadcasts such as the BT Premier League and FA Cup, the Royal Variety Show and the Ariana Grande One Love Concert,” she told me. Although enjoying her role with Arena TV, in 2017, Georgia began to consider what her future may hold and where exactly she wanted to be working. “I started to narrow my ambitions and set my sights on Formula One. The idea of coordinating such huge events and arranging international travel was such a challenge, plus with my interest in the sport, it seemed the best of both worlds. From then I checked the Sky careers website every day for about nine months, until finally a Production Coordinator role appeared with Sky Sports. It didn’t specify which sport I’d be working for but I knew this was my best chance of getting closer to where I wanted to be,” she said.

The sport which she was assigned to was football, covering the Premier League as she had done previously for BT Sport. “It was nearly triple the amount of matches I was used to and it was a case of getting your head down and off you go. The role was very different to my previous jobs and it was a steep learning curve of course, but one I immediately enjoyed! The only downside with working on football is it’s very formulaic. I was doing the same work every week so you can easily tire and lose the excitement. I decided to do the best I could and wait for an opening on a different sport,” Georgia said. In her first summer at Sky, she offered to work Goodwood Festival of Speed, giving her an insight into the world of motorsport. “Once I started at Sky, I made it clear to my line manager I was happy on football but should any opportunities arise on Formula One, that’s where I’d ideally like to end up. Not long after Goodwood, the Coordinator role on Formula One became available. I’d only been at Sky nine months and felt like I’d hit the jackpot!” she explained. 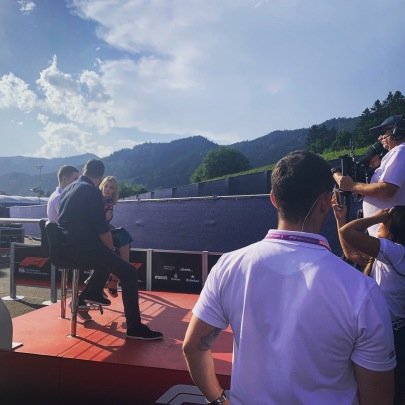 Georgia has now been working with Sky Sports F1 for almost two years as a Production Coordinator. Arranging travel is one of the biggest parts of her job, securing flights and general transport around the world for the Sky F1 team. “It feels like my job changes almost daily! Of course, the largest part of the role is the international travel. Each race, I personally have around 18 members of Sky UK staff to book travel for, but the wider Sky team that travel to each round is about 55 so you also have accommodation and on-ground logistics to think of,” she said. “We also need to create the content you see in the build-up and either side of the race, so frequently we have shoots abroad which need arranging. I also manage Visas, branded content shoots, invoicing, requesting crew and studio resources on our inhouse booking system, issuing planning sheets and ordering miscellaneous bits such as the Sky Sports mic heads and umbrellas you see on air.” Georgia attends roughly half the races on the F1 calendar with her main role on a race weekend to support the Production Manager with day-to-day logistics. Speaking of an example of her work, she explained: “during a race last year we had two crew members who needed to get home urgently due to emergencies. In that situation the Production Manager is able to go about their day, and leave me to arrange getting those crew members home. Sometimes the content team will come up with feature ideas which need props. One race last year my morning involved driving into the city to buy two identical remote-control cars, you never know what you’re coming into each day, but that is what makes it exciting!”

With travel being notoriously unpredictable, making plans, and then re-arranging them, can be quite difficult. One of the biggest challenges of her career came this year when Georgia had to rearrange both the transport to and from the 2020 Australian Grand Prix, all in a matter of days. “The biggest challenge has been the ongoing fall out of the Coronavirus. About a week and a half before people started flying, Sky rightly clamped down to avoid any country which the UK government considered high risk. Unfortunately, that wiped out around 80% of the flights I had for the team, which was then a case of booking what we could to get everyone to Melbourne. After that huge task, we all made it, only to turn around and head home three or four days later,” the Production Coordinator described. Applying for Visas for 50 people, and last-minute flight cancellations and delays can also cause a headache, as well as action on track that can lead to the team staying late into the night waiting for answers. “Battles on track can cause us challenges, for example at the Austrian Grand Prix in 2019 we waited for hours for the FIA’s decision on the Leclerc/Verstappen incident. Sky Sports is the home of F1 in the UK and we have a duty to continue broadcasting in these situations. Flights for core team members had to be pushed back to Monday morning,” Georgia told me. 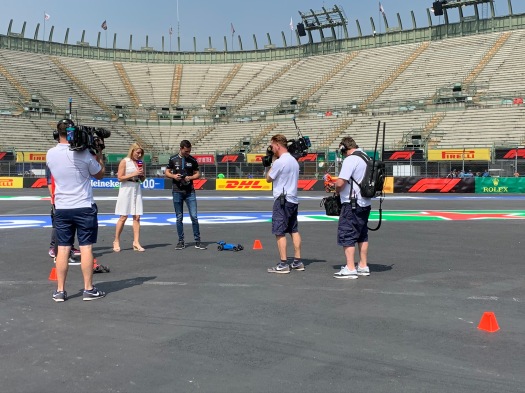 After setting her sights on Formula One a few years ago, working at Silverstone, the home of British motorsport, is undoubtedly one of Georgia’s career highlights. “Silverstone 2019 was one of those pinch-yourself moments, but for a whole weekend! I went in 2018 as a fan and knew I wanted to be back there in 2019 working with Sky, so I was proud to achieve that. The content Sky put out that weekend was outstanding, and I’m allowed to say that because I’m not the one actually creating it! I remember watching our output and feeling proud to be a part of team that produces that standard of broadcast,” she said.

Georgia Constantinou has watched Formula One on TV since she was young, and as she got older, set her sights on working in the industry. She is proud to be working with Sky Sports F1, experiencing the magic of racing in real-life and bringing that to the viewers at home. Her advice for people wanting to work in the sport would be: “be proactive. Do research into the companies that actually work in the paddock. It’s easy to just say ‘I want to work for Team ABC’ but you may find a quicker route in by starting somewhere smaller. There are hundreds of people that work at a GP weekend outside of the big teams and if you can gain an understanding of the paddock, don’t underestimate how valuable that will be to a potential employer. Also, I wouldn’t be where I am if it wasn’t for working on alternative sports before sidestepping to F1. It may not be the most direct route and could potentially feel like you are miles away still, but as long as you’re developing yourself towards a role in motorsport, it’s never a waste of time.”