Most children wanting to pursue a career in motorsport often start at a local karting track and work upwards from there, but this was not the case for Katie Milner. Daughter of a 2-time British Rally Champion, Katie started in the lesser-known Autograss series as her father did and then had to transition onto tarmac, so I spoke to her about her unusual route to GT racing and why she feels it’s important to be a member of Dare to be Different.

Having grown up in a racing family, Katie admits that cars and motorsport was always in her blood, and although she was only 3 years old when her father won his titles, it is still something that has influenced her childhood. “Growing up where we live we have our business on our doorstep, we do servicing and MOT, motorsport preparation and anything to do with cars really. I’ve always come home from school and mucked about in the garage, so it’s always been part of my life,” she explained. 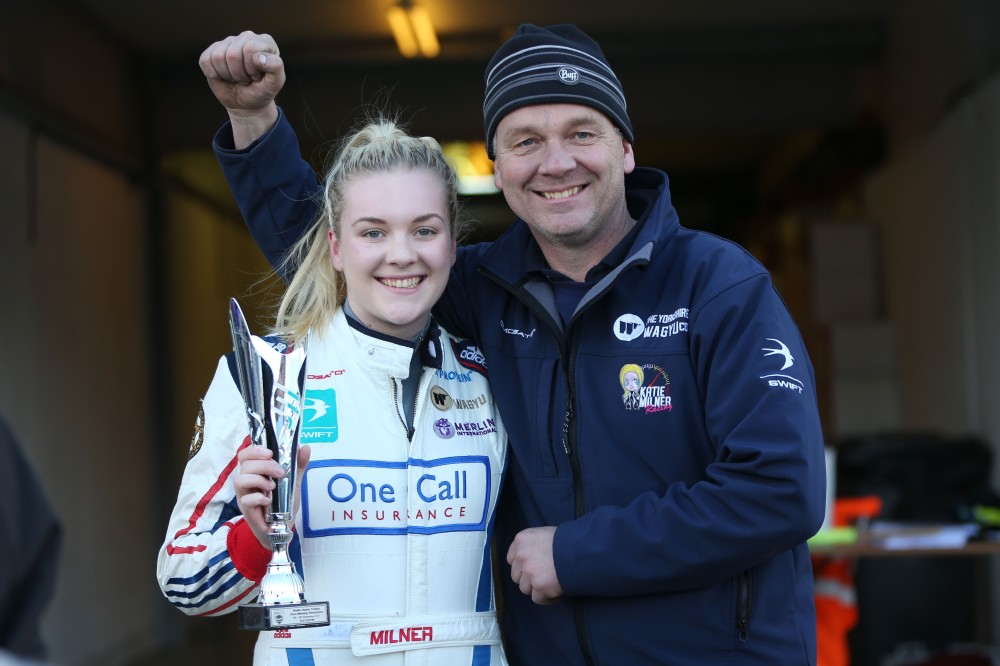 However, that doesn’t mean that racing was always her first aim. “My older sisters had horses and when I was 10 I had a horse for a year, but I didn’t really like mucking it out every day and doing all the dirty jobs, so I just changed to my Dad’s sport,” Katie told me. She also said how she didn’t even attend a race before getting a second-hand car and heading to a circuit to test out her newest hobby.

Milner went on to race in Autograss, a series which involves driving on fields, grass and mud rather than tarmac. “I think Autograss is a good stepping stone,” she said, “it’s quite like karting in that there’s pretty much a race on every weekend. I just started out in the Club events in Scarborough for a year and by the end of the season I was winning races and from then I went on to the British championships and finished second in that.”

She was extremely successful winning 5 junior titles in a matter of years, however transferring her skills to a circuit was more difficult than she first thought. “The first race weekend was quite a shock. I was almost straight on the pace in the testing on the Friday, and that was my first time in the car. In qualifying I got it a bit wrong, I had a crash and my Dad spent the whole night fixing the car. It was really a reality check that it wasn’t going to be an easy transition, I had to really concentrate and get my head down.”

Nevertheless, the tricks she learnt from her time on grass has given Katie more confidence when things do go wrong. “I’d like to say if the car steps out I could hold it a lot better than some of the karters out there,” she told me, adding: “it took a while to get used to the racing line and putting my hands in the right position on the steering wheel though!”

Circuit racing is not the expected route from such a series, with most drivers going onto rallying or rallycross. Katie’s father progressed in this way en route to winning his British Rally Championships, but this wasn’t what she wanted to do. “I didn’t really fancy rallying just because I’d been in Autograss and you always know where you are in a race and battling with people. I didn’t fancy the idea of going through forests and racetracks on my own and not really knowing where you are until you finish and everyone’s finished the stage,” Milner said.

This year, Katie will be racing in the Ginetta GT5 series, talking about the upcoming season she said: “It’s going to be interesting to see after the first couple of rounds where everyone is.” With new team personnel, teammate and sponsors, she is feeling confident saying: “realistically we should finish in the top 3.”

In many races, Milner has been the only female driver, and unlike other racers she admits it is something that she thinks about. “There’s so many different opinions about female racers and we’ve just always said you all look the same with a helmet and overalls on. Everyone should be treated as an equal,” she told me. But this doesn’t mean she always gets treated the same by all her competitors, “I’m already successful, and I think that’s quite a big help, and people already respect you.”

Katie went on to describe how the older, more experience drivers often come up to her after a race and will shake her hand and be respectful, however unfortunately not all the younger racers are as humble. “I raced against some people last year who are my age and they’ve been very respectful as I have back,” she explained, “but some of them are harder to you than they are to others on track because you’re a female and you’re in front of them… some of the younger boys give you a dirty look and walk off if you’ve beaten them.”

Looking to the future, Milner had wanted to go into Touring Cars, but said: “the more I’ve raced this year, I’ve realise there’s more chance of being a professional driver in GT racing.” Her ultimate aim is to race and win the Le Mans 24 hrs, but first will look to get some experience in Europe having only raced in the UK so far in her short career.

As with many of women in the sport, Katie is a member of Dare to be Different. “I spoke with Susie (Wolff), Jamie Chadwick and Tatiana (Calderon) at the F1 Live show in London and we did an interview on stage there. I like helping out and going and talking to young girls about my experiences in the industry,” she described, “it makes me more determined if I’m the only girl in it (a race), I want to prove that I’m not just there to make up the numbers. Any girl that wants to come into motorsport, if there aren’t any other girls in the championship, don’t be afraid of it!”

Katie Milner is only at the beginning of what promises to be a fantastic career in motorsport. With racing in her blood and her background in Autograss, she is prepared for whatever a race may throw at her. With the aim of winning Le Mans and European racing firmly set in her sights, there is only one way for the 18-year-old’s career, and that is up.