F1 is broadcast to millions of people worldwide and this is crucial to maintaining the loyal fanbase the sport boasts. Being part of the broadcast team is an important part of this, with those involved having to portray the excitement and action of the live event to viewers at home. Rachel Brookes is one of the most respected F1 journalists in the paddock, so I spoke to her about her career and travelling the world with F1.

Growing up in a family who were passionate motorsport fans, Rachel was surrounded by the sport from a young age. “With two older brothers, the only way their ‘kid sister’ could spend time with them at weekends was to watch the Grand Prix,” she told me. Previously, her father had competed setting endurance records. “The Le Mans 24 hours is nothing compared to what they did! They used the old circuit at Monza, including the banking, which is terrifying in itself,” she said. To further add to the racing culture in the Brookes family, when Rachel was slightly older, one of her brothers started driving competitively, and although it was only on a small-scale, this is where she got her first taste of being in a pitlane. 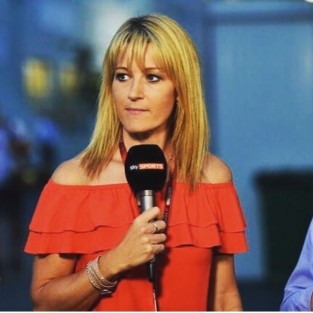 Despite a strong interest, Rachel thought working in F1 was an “impossible dream” and so at the age of 9, decided she wanted to be a radio DJ. Once in her late teens, she went to university hoping to make this happen. “I went to Birmingham University of Central England to do a Media and Communications degree, but I didn’t enjoy it. I wanted to work in the industry as soon as possible,” Brookes said. Rachel went on to work at a volunteer radio station, where she began actively applying for relevant jobs. “I used to buy the Guardian newspaper when it would have a ‘media jobs’ section and I would apply for anything and everything. I wasn’t qualified for any of the jobs but when I got the rejection letter there was always a name on it. I then wrote to the person and offered to make the tea for free if they would just give me a chance,” she explained. This helped her to secure work experience, but her first proper role in radio came when she entered KISS FM’s ‘Search for a DJ’ competition. “One night I recorded my radio show and sent it. I won and began working for KISS,” Rachel described.

After going on to work for Rock FM and Power FM, Brookes had decided she wanted to work for Sky Sports News. “Whilst working at Power FM, I also started working for talkSport. They had started a TV channel by putting cameras in the radio studio and broadcasting the shows on TV. We would prepare all our own stories, write and then present them. It was great fun and gave me a lot of experience in live presenting without any support. I am sure it’s why now if I have to fill time, it never fazes me,” Rachel explained. During her time there, Brookes met someone who worked at SSN and so asked the name of the boss. She wrote to him on several occasions and a while later managed to secure an interview. “This time the boss of SSN said that if I quit my job the next day he would give me a job, so I did,” she said.

After working with Sky for 18 months, Rachel decided she wanted a change. “Sky didn’t see me as a presenter at the time but I was desperate to give it a try and Setanta Sports News were offering me that opportunity. I took a pay cut to do it but I had faith in my ability and ended up presenting the main evening show every day for 18 months,” Brookes told me. Following the channel’s collapse, she went on to work for IMG before Sky got back in touch with her. She returned to the company however, this time she was given the chance to be a both a reporter and presenter. “The first time I covered cricket, the night before the News Desk Editor asked me: ‘do you know anything about cricket?’ ‘Yes’ I said. ‘Good, can you go to Canterbury tomorrow and do our live updates pitch side?’ I am pretty sure I didn’t get any sleep that night but I loved every second and ended up doing cricket full time for the rest of that summer and a few that followed too,” Rachel told me. In 2011, Brookes went to report on the spot-fixing trial in cricket along with someone much more experienced in court reporting and who she would effectively be shadowing. However, on the first day of the trial, the senior reporter was ill and so Rachel went on to present from outside the court everyday for 5 weeks. It was at this time that Sky had also secured the F1 rights, and having always had an interest in motorsport, she applied for a role. Speaking of it she said: “I had my interview before getting to court one day! I got the job and worked on F1 for Sky Sports News before switching full time to the F1 channel last May.” 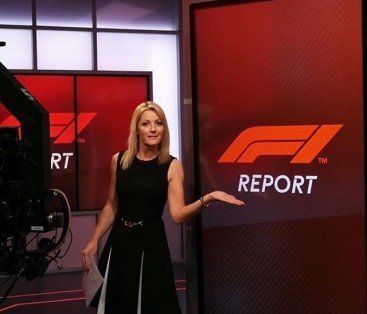 Now focussed solely on F1, Rachel’s role isn’t just what we see on TV. “Rarely a day goes by that I am not in touch with the office about one thing or another,” the presenter explained. “I also host the F1 Report some weeks from the studio and that entails conversations about topics, running orders and guests. For race weekends, I liaise a lot with the F1 Show producer leading up to it. We are usually discussing guests, features and topics as well as anything else we can do to add to the fun element,” she said. When Brookes then arrives in the host country for that weekend’s Grand Prix, more filming must be done such as opening titles, features for later on, and interviews with drivers and team personnel. She must also be across all the goings on surrounding the sport in order to keep the Sky Sports F1 audience up-to-date. “I will also be out and about trying to find out information. For example, I discovered the plan for a race in Miami next year and some details about Baku’s future. That meant when I saw Chase Carey in the pit lane on the Sunday (in Azerbaijan) I was able to ask him. He didn’t confirm it obviously but as we now know, it could happen,” she described.

Although Rachel is very experienced in the field, she has still been underestimated due to her gender. “In China, every day the security guard would check my pass as I entered the media centre. Without fail. Yet none of the men I followed in had theirs checked. Once I got in the lift and reached the top floor, there was another security guard. Again, he stopped me to look at my pass. I asked a few of the men if they had ever been checked, and they said no. It may sound like a small thing but it’s a sign that they are still not used to women filling these sorts of roles. There was also an incident with a driver who deliberately gave an obtuse answer to a female reporter. She ignored it and walked away but as she left she heard him say to the male reporter ‘she didn’t even notice’ and he laughed. To be fair to her she called him out on it and told him it was all on camera, but this sort of behaviour is sadly not unique. It’s certainly not commonplace, but it’s not an isolated incident,” Brookes told me. However, Rachel reassuringly added: “the sport has come so far in terms of equality in the working environment and I have seen changes in just the time I have been there so I am hopeful of these instances disappearing altogether soon.”

Nevertheless, the negative opinions of some, are vastly outweighed by the amazing experiences F1 offers her. “I still get an incredible buzz from being in the pit lane before the race. I have no idea how the drivers cope with being asked for interviews just before they start but it is the highlight of the weekend for me. Last year at the British GP, I stood under the podium for the celebrations. I am usually always in the pen at that point but as Natalie (Pinkham) was working I was free to stand there and soak it in,” Rachel explained.

Interviewing is a large part of her role, and something she hugely enjoys. Despite talking to Sebastian Vettel several times every weekend in the pen, she would still love to speak to the German Ferrari driver more, saying: “I would like to interview Sebastian away from the track. Somewhere he is comfortable and just find out what makes him tick. He is so guarded in the paddock and in the driver’s pen. He’s a father now and has a home life that no one ever sees. Even Kimi is on Instagram now! Yet Seb is still so guarded. I really would like to find out what sort of personality is behind all those barriers!” Looking to the past, Rachel would also have loved to have spoken with Ayrton Senna. “I wish I could have interviewed him. I have watched all the documentaries on him and spoken to plenty of people who drove with him, but I never got to form my own opinion,” she said.

As an influential woman working in motorsport, Rachel was keen to get involved with ‘Dare to be Different’. Now into it’s 3rd year, Brookes was one of the initiative’s first ambassadors. “When Susie Wolff said she was starting D2BD I loved the idea so I was thrilled when she asked me to be an ambassador. We have to show girls that motorsport is a genuine career option. D2BD days teach you lots of elements too. I have been along to show how to be a reporter and they also have a STEM session. I never considered motorsport as a career option at school, my teachers laughed at me wanting to be a radio DJ so imagine what they would have said if I had said I wanted to work in motorsport? I am so honoured to be involved,” Rachel described.

Rachel Brookes is one of the country’s leading sports broadcasters, now regularly seen fronting Sky’s F1 coverage. Having always loved the sport, she never intended to work in it, but now hopes to inspire young girls into motorsport by showing them gender is no limitation in the industry. Her advice for those interested in following in her footsteps would be: “TV is tough and there are plenty of knock backs. However, I am proof that if you work hard and are very determined you will find that you will eventually be in the right place at the right time to get an opportunity.” Even now, she has achieved so much, but still has aims and aspirations for her career, such as finding the real Sebastian Vettel. Whether she will or not, we will have to wait and see.

(all photo credits, unless specified, Rachel Brookes and Sutton Images)

One thought on “Rachel Brookes: “I am proof that if you work hard and are very determined, you will eventually be in the right place at the right time””