The Australian Grand Prix has been the curtain raiser for the new F1 season for several years now, and so there is a pressure on the team of organisers to set a standard for the coming races. As many wait in anticipation for the sport to begin after the winter break, when the race weekend itself comes around it, it marks the end of the planning for those working at the Melbourne circuit. Kristalla Dimitrak had no previous interest in motorsport before securing her current role as the Marketing Coordinator for the Australian Grand Prix, but now couldn’t imagine her life without it. I spoke to her about marketing, F1 and her passion for sport.

Growing up in Adelaide, home of the Australian Grand Prix for a decade, Kristalla’s Dad took her to the race but she never followed the sport or intended to work in it prior to her job now. “I never intended to work in motorsport specifically, but I always wanted to work in the sports industry. Growing up, my Dad was an absolute sports fanatic, so every weekend I was at a different sporting event, whether it was football, tennis, basketball or athletics. Dad took me to the AusGP when I was just a toddler back in my home city of Adelaide,” she told me. However, marketing was her desired area of work with it having been a passion for a long time. “Marketing has always been the career path I’ve wanted to pursue,” Dimitrak said. “Once I completed my degree I couldn’t wait to jump right into the world of marketing! I think to be a good marketer it’s important to be passionate. The concept of developing a campaign and producing great content for a global brand like F1 is a dream come true. The Formula 1 Australian Grand Prix is a pinnacle event which celebrates and presents all that is cutting edge, aspirational and prestigious and I’m so proud to be a part of it.”

Wanting a change from her previous role, Kristalla began searching on job websites for something that combined her love for both marketing and sport and came across an advertisement for the Australian Grand Prix. “My previous role was in the marketing team at Miss Australia so it was quite a change going from marketing a beauty pageant to marketing the fastest cars in the world! I saw the job ad for a full-time role at the Australian Grand Prix. I applied immediately. They gave me a call and after a significant three round interview process I was awarded the role,” she explained. As the Marketing Coordinator she works across anything related to the branding and advertising for the event, including developing the ‘look’ and ‘feel’ for the campaign and advertising for radio, TV, print and online. Kristalla also plans the promotions throughout the year as well as the activations that lead up to the Grand Prix. “I’m grateful to work in a team with such talented individuals. My manager has a wealth of knowledge as an experienced marketer, so I feel lucky to work alongside her. I think the importance of a good manager and mentor in the early stages of someone’s career is vital,” Dimitrak told me.

This planning begins almost immediately after the race for the current season. “I know that sounds crazy but it’s true,” Kristalla explained. “This year as soon as the event wrapped up, I sorted through over 40,000 captured photos so that we could start developing the creative for the 2019 campaign.” However, this is after the race weekend itself for which she admits she has one of the best jobs in the paddock. Dimitrak manages the exclusive behind-the-scenes and ‘money can’t buy’ experiences that go on throughout the weekend, getting to meet the thrilled fans who are lucky enough to take part. Speaking of it, she said: “On-track Pit wall canopy sessions, driver meet and greets, Garage Tours, Paddock Tours and more! It’s very rewarding to meet with the die-hard fans who have won promotions from throughout the year and it’s super cool to go behind the scenes in the inner sanctum of F1.” 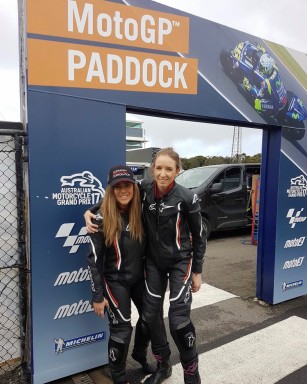 Although this can all sound rather glamourous, the reality is extremely long days and not a lot of free time. “I think time management and staying energised is probably the biggest challenge of my job. We work some crazy long hours in the lead up to the event and at the event itself. We are at the circuit by 6am and can be there till around midnight and then need to be back at the circuit by 6am the following morning,” Kristalla described. Despite the stress of the race weekend, it is all worth it when the Grand Prix has been a success, and Dimitrak herself also gets to experience some amazing things. At last year’s MotoGP, she got the chance to ride around the circuit on the back of one of the bikes, however her best moment so far was meeting a fellow Australian. “Meeting Daniel Ricciardo at AusGP this year felt very surreal. He was so friendly and great to his fans,” she told me.

Kristalla Dimitrak may not have intended to work in motorsport, but her talent for marketing has allowed her to transfer her skills to a role she thoroughly enjoys. Working for the Australian Grand Prix, the first race of the F1 season, means there is a pressure to put on a good show, something that in recent years the GP has excelled at. Despite being in the early years of what will surely be a long career in the industry, Kristalla said she would advise others to “self-evaluate where your skill set lies”, meaning that you work out exactly what it is that you are good at so you can showcase that as you go forward. She also added: “good things come to those who hustle, if it means having to do an unpaid internship then do it!”