When several members of your family are involved in the motorsport industry, having and interest and a passion is often a given. But when you come from one of Ireland’s first families of the sport, motorsport is in your blood. Nicci Daly grew up surrounded by cars, but that’s not the only sport she has had an interest in, having represented her country internationally in hockey. I spoke to her about her childhood, Gaelic football, hockey and her new charity challenge.

As mentioned, Nicci’s early years were spent surrounded by a strong racing culture, particularly with her father and uncle. “My passion for motorsport is in my blood. I grew up in the paddock of Mondello Park, spending almost every weekend of the summer months down there with my family. My dad Vivion was one of the most successful drivers in Ireland and my uncle Derek Daly drove in Formula One and Indycar, so there was no escaping it,” she told me. However, this doesn’t mean her sporting interests were dominated by racing, with Daly enjoying pretty much any sport. “From the time I could walk I would kick or throw a ball. I began playing sport in the school yard playing football with all the boys, while the other girls offered to stand as the goal posts instead. From there I was introduced to Gaelic football at the age of 12. I developed a love for that and represented Dublin Senior Ladies in 2009. I had never heard of hockey before and to be honest I was not keen on the idea. I fought it for the whole first year I played, but eventually opened myself up to it and began to love it!”

Having a skill and talent for several sports, choosing one to focus on became a challenge for Nicci, meaning she decided to take some time out of her hockey career, prioritising Gaelic football. “In 2009 I was persuaded to go back to playing hockey and was selected for the provincial U21 team. I remember my coach at the time saying to me that by the end of the provincial tournament, the Irish coach would contact me about training with the Irish Senior Women’s team. He was right. I got a call to come to a training weekend on a trial basis. The same year I was also playing on the Dublin Senior Ladies GAA team. I decided to give Hockey a go. I got my first international cap in 2010 and have played over 160 times for Ireland,” Daly explained. 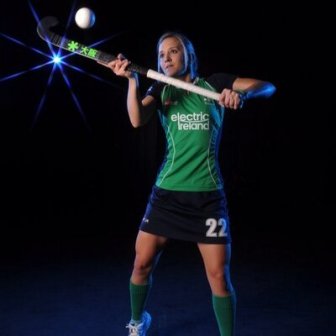 Although having competed in both hockey and Gaelic football, Nicci’s career quickly took a turn back to her original sporting love. “When I started my engineering degree it began to play on my mind. I started to become more aware of the engineering involved in motorsport and when I was finished my degree, I didn’t really like any of the job opportunities so I went and did a Masters in Motorsport Engineering at Cranfield University,” she said. Daly’s interest in engineering combined perfectly with an interest in motorsport, leading to her Masters qualification. The sport captured her attention, and as she got older, as did the mechanical side of motorsport. “I just love the sound, the smell and the racing! Only as I got older and developed more technical knowledge did I become even more interested in what makes these cars do what they do. That’s been a whole new realisation that seems to be a never-ending learning process,” Daly told me.

As part of the Irish National Hockey team, when qualification for the Rio 2016 Olympics came around, her full focus was on reaching Brazil, but unfortunately it was not meant to be. “Not qualifying for Rio was probably the lowest point in my career. We missed out in the cruellest way, losing on sudden death penalties. We couldn’t have been more prepared as a team, we were playing the best we had ever played and we were scaring all the higher ranked teams. Having something else to focus on definitely keeps you grounded. You can live in a bubble sometimes so when you hit a low point it can be very difficult to get yourself out of it. Having a completely different professional career has enabled me to take on new challenges without feeling sorry for myself. It helps to shift your focus while maintaining to develop yourself,” Nicci said. 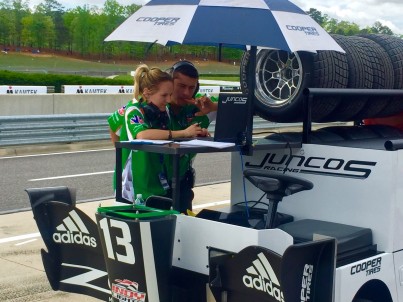 Having completed her Masters degree, Nicci managed to secure a job at Ford’s Dagenham engine plant as a test engineer. “My role was to test and analyse production engines, preparing test applications, programming test cycles and specifying and developing new fuel priming procedures,” Daly described. Although this role didn’t lead directly to her current job, it did introduce her to working with data, developing methods for analysing and how to effectively use the data. She now works for the Juncos Racing team in the USA as a Data Engineer. “My role involves designing, calibrating and installing Data Acquisition and measurement systems into the race car. Developing Excel workbooks for quick and efficient data analysis, tracking, documenting and reporting changes, system vitals and overall driver/vehicle performance and to assist the race engineer with data and changes to be made on the car,” Nicci said. 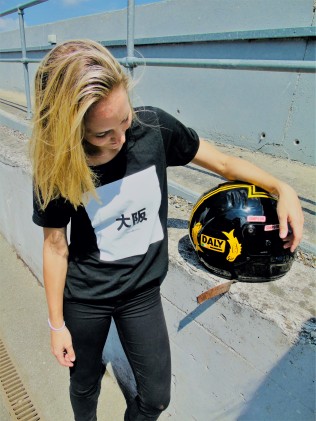 With motorsport in her blood, Daly now plans to move from working in the pits, to on the track. In August she will take part in a race at Mondello Park in Ireland alongside her friend Emma Dempsey. “When Emma invited me over to her house a couple of months back we picked up right where we left off our last conversation…talking about motorsport. We talked about our own dreams of racing one day and sure enough by the end of the night Emma had asked me to enter into a race with her. Two days later, Formula Females was formed,” Nicci explained. Formula Females was created for several reasons, including Nicci’s eagerness to fundraise in memory of her father. “It is about raising money for the Irish Cancer Society and remembering the legacy left behind by Vivion Daly. It is also about inspiring the present and future female generations to get involved in motorsport and to encourage them to choose STEM subjects. Whether it be a race driver, Mechanic or Engineer, this is an exciting, fast paced environment, females can and do thrive in. Finally, it’s about two friends having a whale of a time, fulfilling their dreams of entering into a competitive race and seeing just how much racing talent was passed down through the genes, if any at all,” she exclaimed.

This summer’s race is not their sole focus for Formula Females though, as they hope to keep expanding into the future. “Short term our hopes are to raise 4,000 euros for the Irish Cancer Society, that we remember my Dad’s legacy that he left behind at Mondello Park over the last 30 years and to also be competitive in the race. We are aiming for a strong finish but we have some work to do first, and really just hoping to get a good crowd down to enjoy some gin and jazz over the weekend! Long term we hope to continue Formula Females continues to grow into a female race team attracting more women drivers to join the Formula Female team,” Daly said. 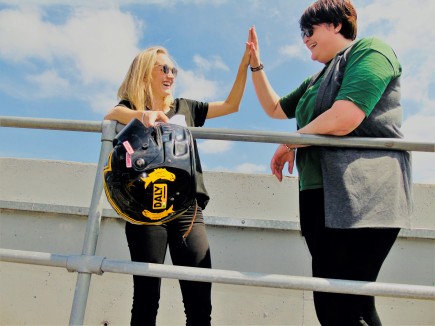 Nicci Daly has used the disappointment of not qualifying for the Olympics to encourage her in her motorsport career. Having worked behind the scenes of the sport, she is looking forward to getting on track and seeing whether her lifelong passion for motorsport translates to a talent for racing. Having worked in several roles in the sport, Daly was keen to emphasise that women should not be intimidated by male stereotypes, saying: “there has never been a better time for women to get involved in motorsport. The number is growing, so dare to be different and step into the extraordinary!” However, Formula Females is most importantly about keeping her father’s memory alive and raising money for the Irish Cancer Society in the hope that their work will one day rid the world of the cruel disease that took Vivion Daly too soon.