The number of females on some of the longest running football shows in the UK is one of the hot topics of the moment. We are slowly seeing an increase in the number of women being given a chance in the industry, a clear step in the right direction when it comes to women being equally represented in the football media. Rachel Stringer has been working on the BBC’s Football Focus for the past 2 seasons, interviewing some of the best players in the Premier League. This year she has also started covering the British Superbike Championship for Eurosport, so I spoke to her about bikes, football and talking to sporting stars.

Having competed in athletics when she was younger, Rachel has always been passionate about sport. “I played every sport going when I was growing up but chose to focus on Athletics when I was about 14 and went on to represent England and GB Juniors in the 800m event,” she said. With sport having been a lifelong passion, there was no doubt in Stringer’s mind that she wanted to work in the industry, however in what capacity was unknown to her. “At one point I thought I wanted to be a sports psychologist. I only decided I wanted to work in sports media when I was in my final year at Loughborough University. At this point I still didn’t know what role or job I wanted to do in the industry but something television related was the plan,” Rachel told me.

Like many wanting to work in television, Stringer’s first role came as a runner for TV production company ‘Sunset+Vine’ during the London 2012 Paralympics. “What a first job it was! The role came about after I decided I wanted to be a runner on sports programmes and so I contacted as many people as I could find. Thankfully S+V gave me an opportunity and I loved it,” she described. Fortunately for Rachel, she joined the company at a good time, as they went on to begin producing programmes for BT Sport. Needing a researcher and knowing what Rachel could do, they hired her for the role on a show called ‘BT Sports Panel’. With the show featuring all sports, Stringer was able to learn about covering many different areas and topics. “A year after joining, BT Sports Panel didn’t get recommissioned so I was out of a job. BT then offered me a role as a junior presenter/researcher which led to me gaining experience working on different sports and shows in front of the camera, including: Fletch and Sav, BT Sports Hub, The Action Women show and the NBA,” she said.

Since then, Rachel has gone onto work for the BBC on shows such as Football Focus. “This is my second season being a reporter on Football Focus. My role is to interview Premier League footballers for the show. When I know which footballer I’m going to interview, I write my questions and send them over to my Producer to double check and then it’s off to the interview,” Stringer described. It’s not only the Premier League in which Rachel works though, with her also working at Wembley Stadium for the FA. “On England and FA Cup match days I present pitch side to up to 90,000 people. It’s amazing when I get to interview the footballers on the hallowed turf straight after the game,” she explained.

This year she has also started reporting on the British Superbike Championship, and despite not having worked in the sport before, she spent much of her childhood around racing. “My family and I have always had an interest in motorsport, I think this stemmed from my Mum being a Speedway fan and being a regular at the Kings Lynn Speedway. As a family I will never forget going to the Australian F1, which grew my passion even more. Growing up we always had a little Yamaha 50cc bike in the garage but I wasn’t allowed to ride it!” Rachel exclaimed. Although it is different to what she has done before, throughout her career, Stringer has gained and gathered many skills she has been able to transfer to BSB. “It’s been one of the best decisions I’ve made in my career so far. I absolutely love the sport. It’s dramatic, thrilling, fast paced and super competitive,” she told me. 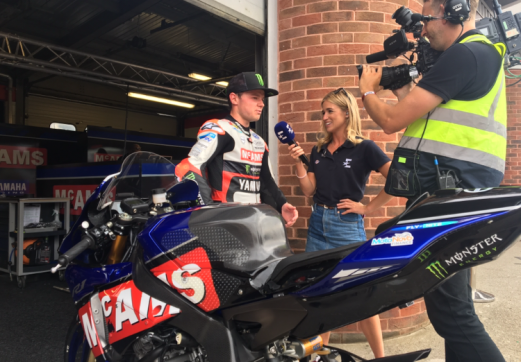 Through her many roles, Rachel has had the opportunity to interview many people in varying sports, a part of her job that she loves. “I get to interview so my great sports stars, but some of the most memorable would be: Michael Johnson, Anthony Joshua and Kasper Schmeichel. They were all such gentlemen,” Stringer explained. However, interviewing the riders in the British Superbike Championship can be difficult with the environment often proving a challenge. “In Superbikes it’s sometimes near impossible to hear a rider’s answer when interviewing them as 9/10 times there is a race going on at the same time only 50m away from you. Throw in trying to hear a producer in your ear…it’s pretty tricky,” Rachel described.

Rachel Stringer’s career continues in an upward trajectory. Having covered the London 2012 Paralympics as a TV runner, 6 years later and she has secured herself a regular place on our TV screens covering a range of sports. With this being her second season for Football Focus and first for Eurosport on their British Superbikes coverage, she is still in the early stages of her career, but has had a large amount of success already. Speaking of the advice she would give to others in the same position she was only a few years ago, she advised: “never book a holiday in advance…you won’t end up going on it! On a serious note my advice would be do your research. It sounds silly but the number of Producers I work with who say this doesn’t always happen baffles me. Fail to prepare, prepare to fail…”