The USA is known for its proud motorsport heritage having hosted series such as NASCAR and IndyCar for decades. The NHRA Championship Drag Racing contains several sub-categories meaning those working in the championship have a lot to juggle. When it comes to those reporting on it, journalists such as Amanda Busick must have knowledge of all drivers in all the races. I spoke to her about racing, sport and her advice for others.

Growing up in the South of the United States, sport was a huge part of Amanda’s life, with most of her evenings and weekends being dominated by a range of sports. “Friday nights are owned by high school football games, Saturdays are taken by the pageantry of College Football and the entire month of March is dedicated to the madness of College Basketball. For my family we were involved in a little bit of everything, including motorsports. From dirt racing to drag racing, we experienced it all,” she told me. Although she dreamed of working as a sports reporter, coming from a small town in North Carolina, Busick didn’t believe that it would be anything more than a dream, with her believing it to be out of her reach. “The goal seemed a bit lofty to be honest,” Amanda said. “For undergrad, I ended up majoring in Entrepreneurship and planned a career for myself in the Tech space mainly out of a desire for financial security. However, when I graduated into the Recession with little to no jobs available, I changed my focus to what I was truly passionate about began my journey to becoming a sports reporter!”

When she was at school, journalism and writing were always strong interests for Busick. “In elementary school I was the head anchor to our daily “Good Morning Madison” news show. My favorite part was listing out the names of my fellow peers who were celebrating their birthday that day,” she explained. Amanda also took a keen interest in the local news, watching the programme whenever it was on TV so she could give her Mother detailed weather updates. “In my childhood I ran into our local anchor at a community restaurant one night, I was truly star-struck! I ended up interning at the same news station roughly 10 years later,” Busick said.

Her first role in the industry came completely by chance, however since then, she has never looked back. Having driven for 14 hours from North Carolina to New York to find a restaurant job that could support a move to the state, Amanda managed to find an internship at a sports agency. Following two-and-a-half years of various placements around New York City, she finally secured a role in the industry. “I finally convinced a start-up college sports network, Campus Insiders, to hire me as a Production Assistant in Chicago. From my experience and connections garnered there, I landed my first side-line gig covering High School football roughly two years later,” she told me. Having dreamed of being a sports reporter since she was young, when Busick finally got to stand on the side-lines at an event, not everything went to plan. “Five minutes before we went live my IFB (communication to the Producer) went dead. My cameraman had to cue me by shaking the camera a beat before we were on and the Producer had to trust me implicitly with my reports as I couldn’t relay information back to the TV truck or to our announcers. I am someone that enjoys adapting on the fly so after that first experience, I was hooked! Broadcasting is also a team sport… there’s always a sense of accomplishment of what we created (and survived) together that is extremely fulfilling to me,” Amanda explained. 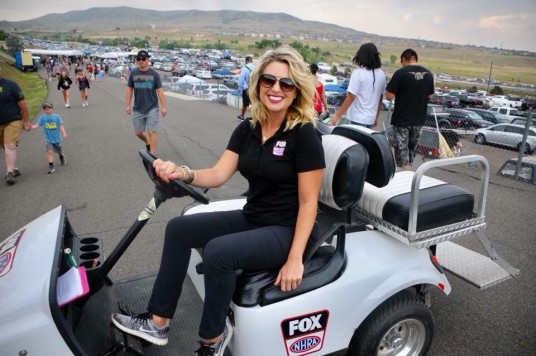 Now, Busick works as a Pit Reporter and Digital Host for the NHRA (National Hot Rod Association) Drag Racing Championship. “My main duty is as the ‘Top End’ reporter on the Fox Sports broadcasts. I have the unique responsibility of interviewing our drivers after they launch 300+ mph down a drag strip. At the ‘Top End’ or end of the track, I am often one of the very first people they see after their run. It’s a special, vulnerable interaction with our stars I don’t take for granted. I also host digital content out of our studio located at the NHRA Headquarters in Glendora, California that will air on NHRA.com, FoxSports.com and more,” she told me. But it’s not only Drag Racing in which Amanda works having covered Formula E’s NYC ePrix, the double-header finale of the 2017/8 season. Even before working in it, she had already had an interest in the championship after watching their 2016 documentary ‘Ice Drive’. “Working with their group this past season for the double-header season finale in New York City is a career moment I am proud to have on my resume. I saw first-hand how Formula E’s momentum, energy and success is being driven by a talented and motivated group spearheaded by founder and CEO Alejandro Agag,” Busick said.

Interviewing is a large part of Amanda’s role, and having covered several sports and series, she has spoken to many people throughout the industry. “I would say my most memorable interviews have been with NHRA’s Legendary Funny Car driver, John Force. He is the most unpredictable interviewee who always keeps me on my toes, I will always be grateful that my career was able to coincide with drag racing’s most successful driver of all time. In addition, this season we launched a ‘MY Journey’ series that allowed us sit-down interviews that tell the dynamic backgrounds and stories of our biggest stars. Having the trust of our drivers to share sometimes the most intimate parts of their journey is something I am very proud of,” Busick described. However, working in motorsport is not always straightforward and sometimes it’s the drama and unpredictability that can be the biggest challenges. “Managing the chaos! Drag racing is unlike any other property on the planet- there isn’t 2 halves or 4 quarters. I often say I have the best gig as a sports reporter and I’m not embellishing on that belief. On Sunday we have absolutely no clue what will be upon us. What we do know is that we will start the day with 16 competitors and end with 1 holding the Wally (NHRA’s trophy). It’s an excitement, rush, and unpredictability that we get to carry out to our fans throughout the broadcast,” she told me.

Although now being a successful reporter covering motorsport, Amanda is keen not to forget her past and is still extremely grateful to all those who took a chance on her when she had much less experience. “When I think of my career on a whole, I truly hope that I am only at the bottom of the first-inning of a very long journey ahead. The most fulfilling part so far has been my role with the National Hot Rod Association. Three years ago, they took a risk on a still ripe reporter and have stood by my growth with an unwavering belief in my talents. To have someone champion your career the way this company has, I am forever grateful for their support,” she described. 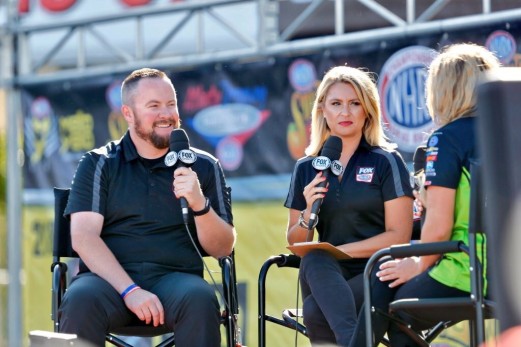 Amanda Busick grew up dreaming of working in sport, though didn’t believe she would ever reach this goal. Following the Recession, she decided the time was right to see if this aim was actually possible, and soon she proved it was. Now working with NHRA Championship Drag Racing, they put their trust in her when she was much less established than she is now, something she is extremely grateful for. Speaking of the advice she would give to those wanting to work in a similar position, she said: “stay the course. It sounds so simple but this industry is unrelenting. Your ‘dream job’ may not end up looking like what you had thought. You will be told ‘no’ more times than you can count. So, if this is truly what you want, commit to it. Everything else will just become part of the process…”