As a Mechanical Engineering graduate, Sabré Cook has a great knowledge of the detail and technology used in racing cars, however she is not only an engineer, but has a very successful racing career too. I spoke to her in October ahead of competing in the final of the Infiniti Engineering Academy, racing in the US F4 Championship, and being announced as one of 60 qualifiers for the inaugural W Series. I caught up with her again to find out how her life has changed since, and her hopes for 2019 both on and off-track. 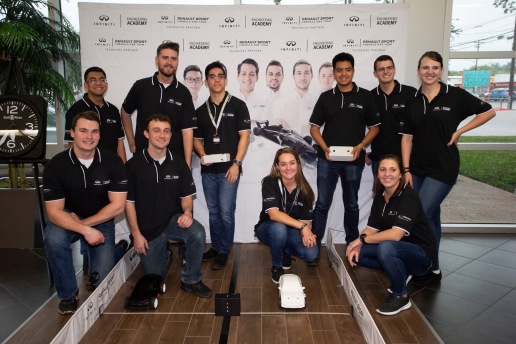 In October, Sabré took part in the final of the Infiniti Engineering Academy for the US region. Following several rounds of competition, she was one of 10 finalists who took part at the Circuit of the Americas in the 2 days prior to the USA F1 Grand Prix. After completing many challenges and exams, the 10 were whittled down to a final 3. “We had several different challenges. There was an engineering exam, then personal interviews, team tests, as well as a RC car race. The top 3 then did a technical challenge which varies per region so you can’t predict what it’s going to be. This was then followed by a media grilling. It was an intense couple of days,” Cook told me. After making the top 3 and completing the tasks set for her, Sabré still wasn’t convinced that she would be the winner, knowing the abilities of the other 2 finalists. “I knew I was giving my best and tried not to think too much about what the others were doing. I felt like it had gone well, but it was hard to tell because each of my competitors were talented candidates, so wasn’t sure how it was going to end up. It’s definitely a tough competition,” she said.

In the end it was Cook who came out on top, with her prize being a 6-month engineering placement with Infiniti Technical Centre and another 6 months with Renault F1 team. “It was amazing and definitely a bit overwhelming (to win). The whole change you have to go through for the opportunity, it took a couple of months to sink in and for me to grasp ‘oh my gosh, I’m actually going to do this’,” she described. 4 months later and Sabré has already started her first placement, having moved from the US to the UK over the winter. “Right now, I’m with the Infiniti Technical Centre and then in June I will transition to Renault F1. I’m currently in the Vehicle Testing department at Infiniti, and will be in Composite Design at Renault later on.” she said. 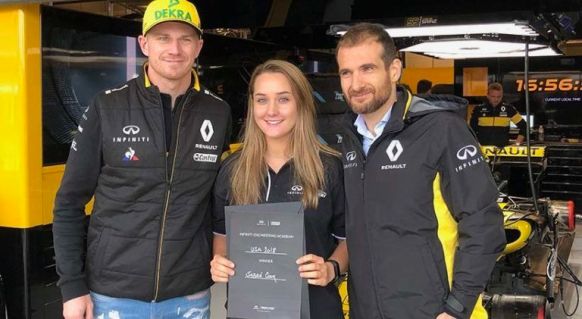 However, that doesn’t mean that this year will be without racing, with Cook being one of the 28 drivers to make it through to the final round of the W Series selection. Had she not been successful in the Infiniti Engineering Academy, Sabré was still planning on making a big move for her racing. “I was going to keep doing what I did last year to find enough (funds) to run a full series in USF2000 or US F4. If I didn’t get this, I was planning on moving closer to the team that I would have been running for and work with them as well as drive in whatever races I could find the funding for. Either way I was due a life changing move and it ended up being this one!” she explained. Her racing career took a different turn when she was approached by a brand-new series. “I got requested for an application by W Series in late October/ early November. There was a bit of time between being announced as a qualifier for the Austria selection and the application submission. So much had transpired within that time that made the W Series option an even more of perfect fit for me,” Sabré told me.

In the months that followed her announcement as one of the initial 60 qualifiers, Cook’s focus turned not only to moving, but also to making sure she was in top-form for the January selection process. “I was training hard and really focusing on diet so I could start the season strong. I also focused on specific skills that could translate into driving and worked on the weaknesses that I know I have. I hadn’t been in a race car since the last US F4 race (in October), I had done a little bit of ‘sim’ (simulator) work, but you do what you can,” she said. Having not been in a racing car for over 2 months, ahead of the W Series selection, Sabré was a little concerned about how well she would do, however she was still confident in her abilities. “I was a little worried because you always want to be in top-form. I knew the good news was that lots of the other girls would be in the same boat as me, especially those who are in the same situation where they struggle with funding, so I knew if I focussed on the skills that the tasks would require then I would hopefully be OK,” Cook explained. 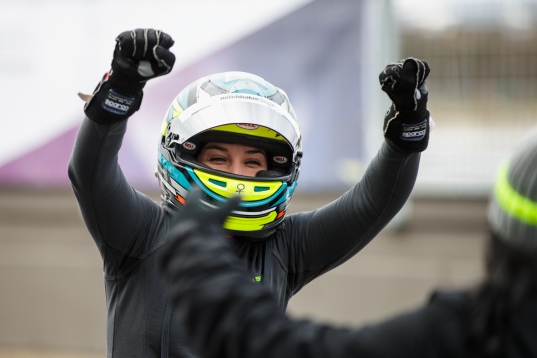 In January, the W Series qualifiers attended a selection process in Melk, Austria, where they were assessed on a variety of skills. “We were tested on the basics that a complete driver needs to have, not just driving but team, mental and media skills. They were really looking for the whole package,” she described. Although speed was vitally important, other aspects were considered in the deliberations, and this new take was a reassurance to Sabré who hadn’t had as much racing beforehand as she would’ve liked. “At the end of the day, you still need to be the best driver and be fast,” Cook said, “but I think it’s really great that they took everything into consideration. For me and many others who don’t have the seat-time, it kind of levelled it out because they were looking for the most potential and the best all-round package. To be a great driver, it takes a lot more than being fast.” However, the event also allowed female drivers from around the world to meet and this was one of the benefits of the experience for Sabré. “I was actually really surprised at how cohesive it was and how much we all supported each other. We had a ‘race of champions’ type of event and we were cheering on the girls in other cars. It was really cool to get to know my group and getting to know the other girls. Being a woman in motorsport, especially as a driver and engineer, you don’t often meet a lot of girls who are really like you. To meet that many for the first time, I was like ‘wow, there are people like me!’ I definitely met a couple of girls who were really amazing and I feel like we could become great friends,” she said.

There is only one stage left until the final 18 racers will be chosen for the inaugural season of W Series, and so this is the next step for Sabré with her aim of being one of those to compete this year. “We have one evaluation left to do which is the official F3 test in Almeria (Spain) in March. After that they will pick the active drivers as well as a few reserve drivers. I’m trying to prepare as much as I can and deliver a good performance again and pray it’s enough,” Cook told me. If she is successful in reaching the final group of drivers, Sabré will have a lot to juggle with both her placement and her racing. However, she has been reassured by Infiniti and Renault F1 that she has their support in following her dreams. “They really support their graduates from the academy and encourage any passions that they have. I think they see the value of my background and think it’s good to have someone in the program that has a different perspective. They’ve been very supportive and want me to continue to pursue my passion because it’s just as much a part of my life as engineering is. I feel very blessed that they are willing to support me in that way,” she explained.

Although now fully committed to W Series, when she first heard about its creation, Cook was against the idea of the series altogether. However, her opinion changed when she began considering the potential of the opportunity and also finding out more about those behind it. “When I originally heard about the idea of W Series, before I knew the people who were involved or understood what their real intention was, I was just not interested at all, I thought ‘we do not need our own series’. But the more information came out, it seemed such an amazing opportunity. I know people have a lot of different opinions about it but at the end of the day if you really want to be a racing driver, you’re going to do whatever it takes to get there. I know there’s guys out there who feel that it is not fair that we get it and they don’t, but if the shoe was on the other foot, 100% they would take the advantage. For any racing driver, if you offer them a free seat in an F3 car, they’re not going to turn it down,” Sabré told me. The main factor that changed her mind on the series was hearing from those involved about their motivations, with her saying: “for me, it was important that there is a good, supportive group behind it. Once I knew more about who was involved, I realised they bring so much experience to the program. Then when I heard their own personal stories as to why they wanted to do this and why they supported this, that for me was a really big perspective change.”

Some in the motorsport industry have expressed concerns over the level of competition and whether there is even a need for W Series at all, but Sabré has no hesitations and believes if anything, the level will be even higher. “What I like about the W Series is they’re creating a great development program for females to have that specialised time, attention and training that we need to go out and perform at the top level. People say ‘aren’t you worried you’re just racing against other girls?’ but they forget that we have raced and won against guys before. Obviously, our level of competition is just as high, so I don’t know why people are so worried about that, we’re just going to push each other even more. We have girls who have just won, like Jamie Chadwick in F3 last year, there are girls who were racing in GT cars and beat all the guys. So if those girls are coming and racing in W Series, why would the level be any different?” she explained.

For the rest of this year, Sabré Cook is focusing on her engineering placement, however can’t ignore the unique opportunity that W Series could offer her. Taking everything one step at a time, she plans to continue working hard to achieve her goal in all areas. “I’m going to keep working hard at my engineering placement and do the best I can for Renault and Infiniti. In addition, I’ll do whatever it takes to balance the work and preparation for the W Series and hopefully secure a seat in that. It’s going to be all about time management, but I’ve had a lot of practice of that with school and racing before,” she said.

2 thoughts on “Sabré Cook: “To be a great driver, it takes a lot more than being fast””