The FIA Women in Motorsport Commission, along with the Ferrari Driver Academy, launched a brand new initiative earlier this year for young female racing drivers aged between 12 and 16 years old. The FIA Girls on Track -Rising Stars programme has selected 20 racers from all over the world who will compete to win a one year contract with the Scuderia Ferrari’s junior scheme, and the opportunity to represent them in a Formula 4 Championship. The FIA has announced the 20 participants ahead of the event this weekend, so meet the first ten to take part! 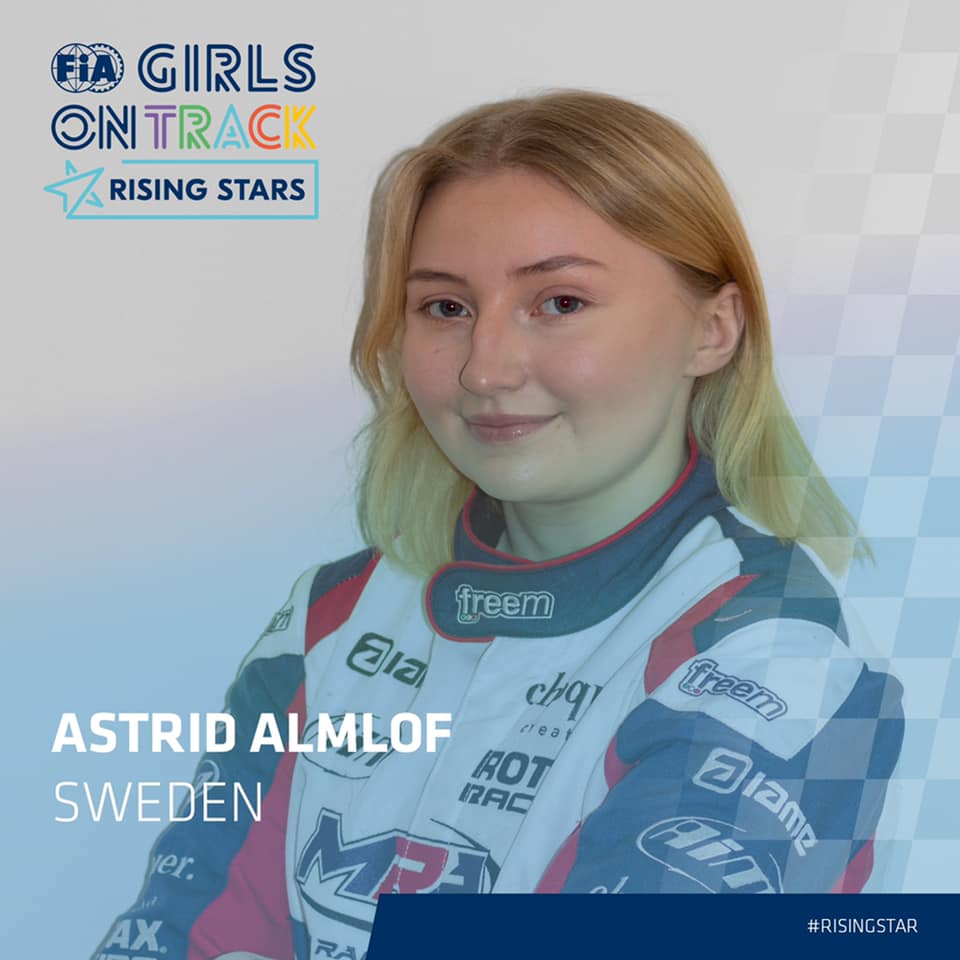 15-year-old Astrid’s introduction to the world of motorsport came through her older brother. He regularly karted when she was young, and soon she too began showing an interest. At the of six, she got her chance in a kart competing in over 20 races across her first two seasons. In 2015, she began racing in the Mini and Formula Micro categories, entering several competitions including the MKR Series Sweden (Middle Swedish Map Racing Series), competing in both karting classes, as well as Raket Cup Sweden. The following year, Astrid returned to both series, improving on the previous season’s results. 2017 saw Astrid focus on the Mini kart class, racing in the MKR Series Sweden and Raket Cup Sweden for the 3rd consecutive season, finishing 4th in the latter. Since then, she has been racing in a Junior 125 kart in series such as the Rotax Max Challenge Sweden, finishing 12th in 2018 and 6th in 2019, and the 2019 Swedish Championship, finishing 9th and making one final. 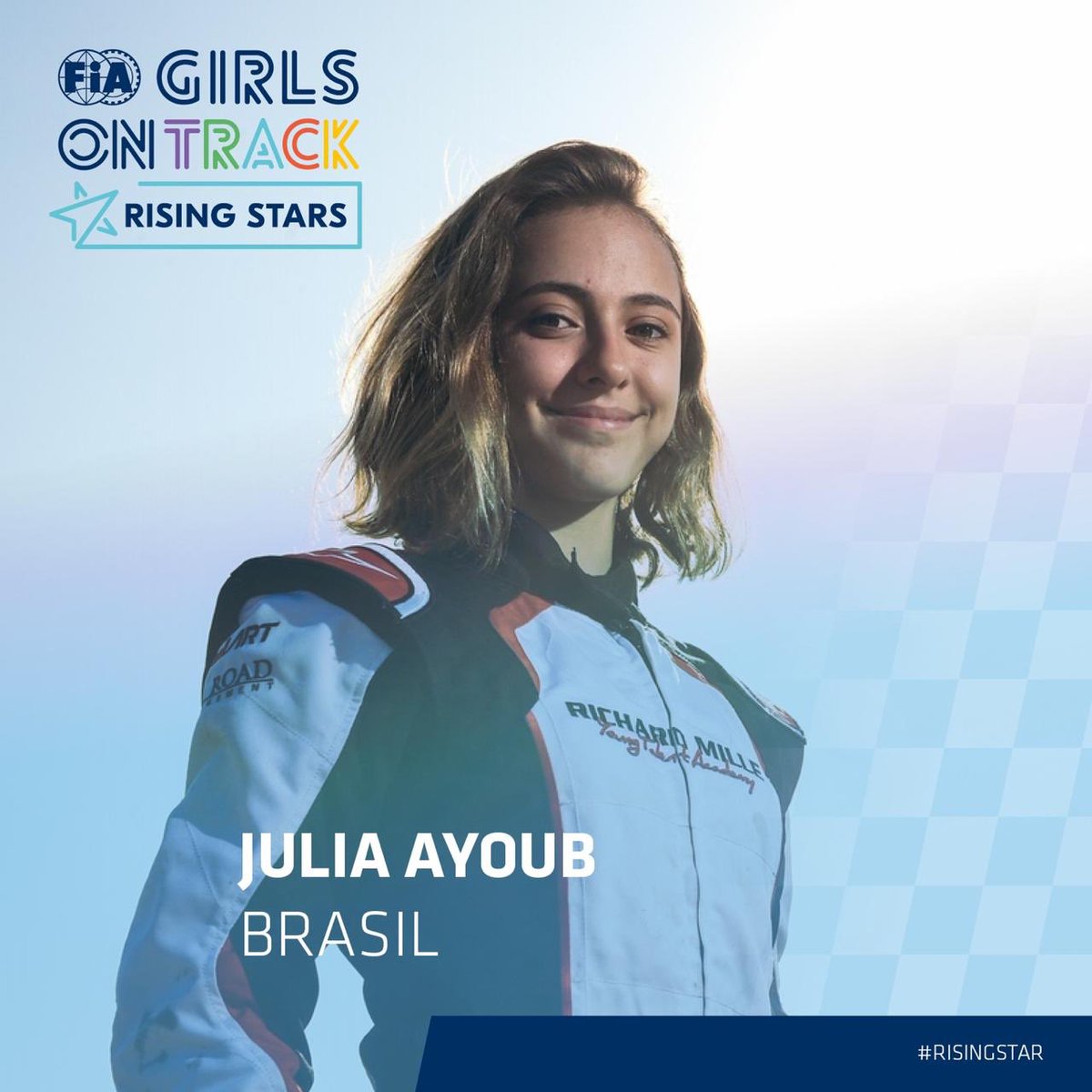 Julia began karting in 2016, when she was 10 years old. After just two seasons under her belt, she was selected by Swiss watchmaking brand Richard Mille as one of two female drivers the company wanted to support with their Richard Mille Young Talent Academy. A group of three young karters were on the shortlist in the OK-Junior kart class, and after an evaluation event, Julia was chosen. This meant that she was able to participate in a full FIA-accredited karting season with Birel ART Racing. In 2019, Julia entered the FIA Karting European Championship, FIA Karting World Championship and 24° South Garda Winter Cup, with her able to have her first complete season racing in Europe. Earlier this year, Julia competed in the Ayrton Senna Kart trophy in her native Brazil, with her crowned champion in the women’s category. 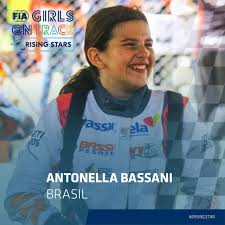 Brazilian racer Antonella, known as Totti, has been karting since the age of four, making her competition debut just a year later. Her career has seen her compete in the Cadet, Rotax Micro Max and Rotax Mini Max categories with her winning the Brazilian Open in 2015. The following season was a standout year as she finished 2nd in the South American Rotax Championship and 2nd in the Brazilian Rotax Championship.  In 2017, Antonella’s racing took her to Portugal where she competed in the Rotax Max Challenge Grand Finals. With a field of 36 drivers, she impressed, finishing in 8th position. In the same year, she finished in 3rd place in the Brazilian Karting Championship. Much like Ella Stevens, also one of the finalists, Totti has been supported by a trailblazing female racer. Since 2018, Brazilian stock car driver Bia Figueiredo has been working with Antonella to help her develop her race-craft and guide her further. However, her career has not always been easy. In 2013, at just the age of seven, Antonella suffered an accident whilst karting in which she overturned and became trapped under her kart. Following delicate lung surgery, and a difficult recovery, she returned to racing, not letting the accident hold her back 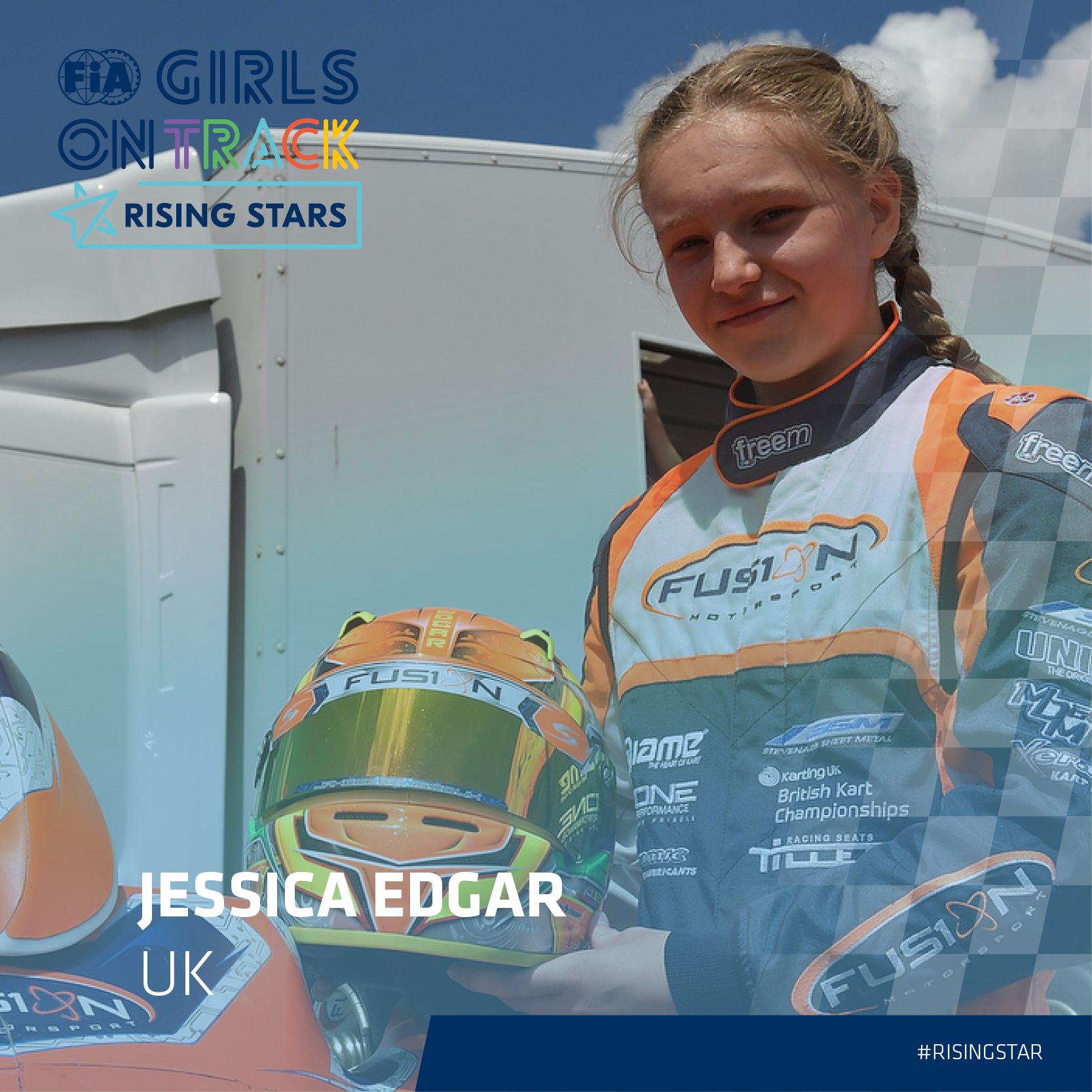 Jessica’s family has been involved in motorsport since the 1960s when her Great-Grandfather began racing. Following in the footsteps of her relatives, Jessica first started karting at the age of four in the Bambino category. In 2012, she began competing in a ‘Dad and Daughter’ team with her father, spending three years together racing at their local karting track. In 2016, she entered the NKF Championship, and although the season was a learning curve for her, still managed a best result of a 5th place finish. She also went on to compete in the 2017 CKRC Club Championship, ending the year as champion. For 2018, Jessica joined Fusion Motorsport to race in the Super 1 British and the Little Green Man championships in the Mini X30 category. Despite not having high expectations for the year, the young racer excelled. In her first race weekend she made the top step of the Super 1 British Championship podium, ending the season 4th overall, and finishing the LGM season in 5th. Staying in Mini X30, 2019 saw Jessica return to the Little Green Man Championship, as well as entering the MSUK British Karting Championship. It was another successful season for her as she won two races in both the championships with her improving on the previous year’s result in the LGM Championship ending the year in 2nd, whereas she finished the MSUK British Karting Championship in a brilliant 4th. Jessica has also represented the UK in racing. She was selected to represent Team UK in the newly created FIA Motorsport Games. 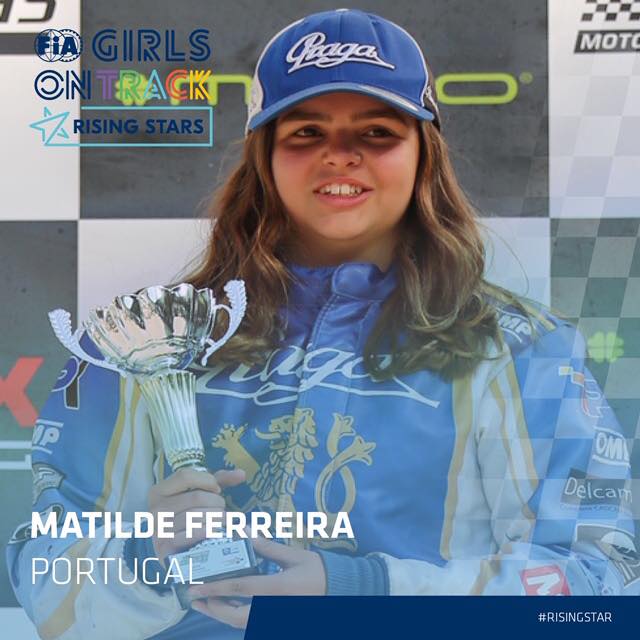 Portuguese youngster Matilde has been karting since the age of five, when she first attended a go-karting track with her uncle and cousin. After asking her mother if she too could take up racing, it wasn’t long before success followed. Just two years later, Matilde became a national champion, before returning the following season to again replicate this incredible victory. The next year, in 2014, Matilde entered the Cadet category, competing in three different championships. At the end of the season, she finished with a 20th place in the National Karting Championship, 14th in the Portuguese Karting Cup and 5th in the Northern Portugal Kart Trophy. In 2015, she returned to all three competitions, bettering her results in two of them, finishing the National Championship in 15th and Portuguese Cup in 10th. In 2016 she again returned to these two championships, and showing her progression, again improved her results (11th in Portuguese Karting Cup, 9th in National Karting Championship). 2018 saw Matilde return to her winning ways as she competed in the Portuguese Open Karting Championship. She recorded the fastest lap in all qualifying sessions, and in the race, with her going on to be named champion. 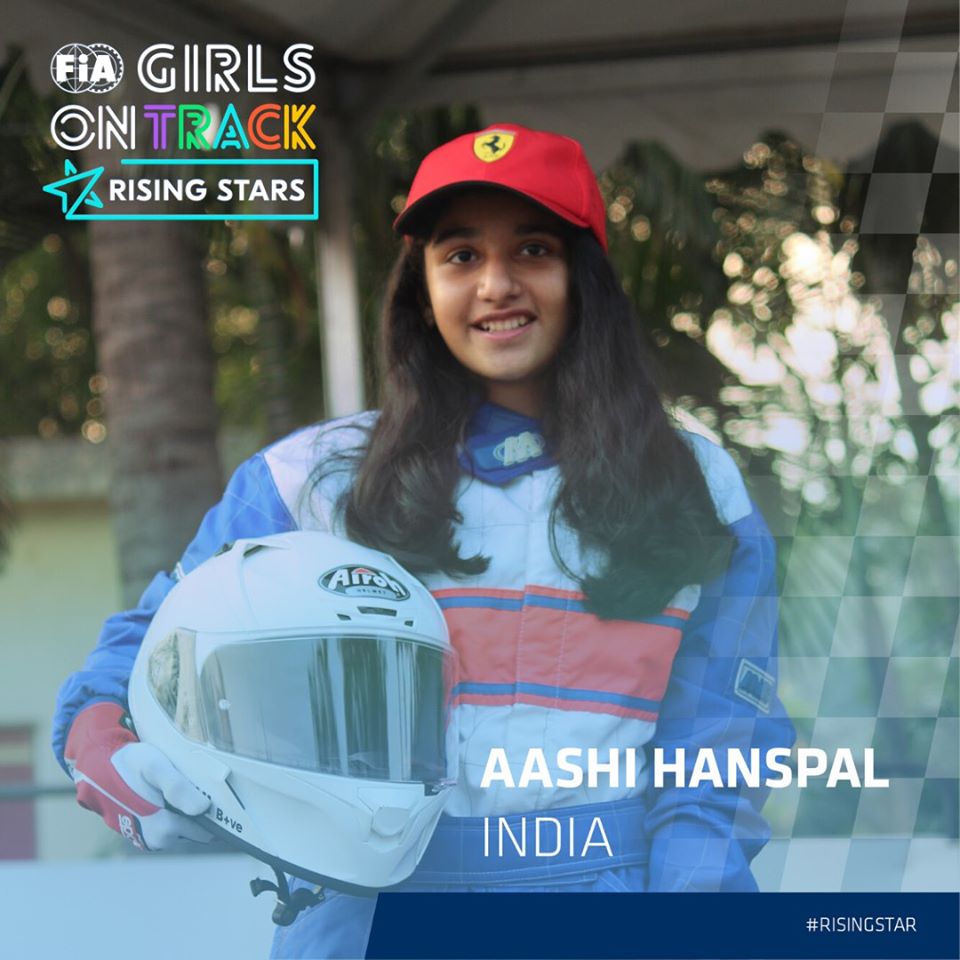 Aashi is one of the least experienced drivers selected for the Girls on Track: Rising Stars programme, only entering the world of motorsport a year or so ago. Her father is a passionate racing fan and rally driver who she says is her biggest inspiration, and encouraged her to enter the sport. With Aashi making her debut in the JK Tyre FMSCI National Karting Championship in 2019, she shocked everyone with her incredible success, finishing the year with five podium positions, including two wins, Aashi ended the season 6th in the standings. Following her incredible debut, she was honoured by the FMSCI (Federation of Motorsport Clubs of India). She received the Outstanding Women in Motorsports Award, following in the footsteps of fellow racer Mira Erda. 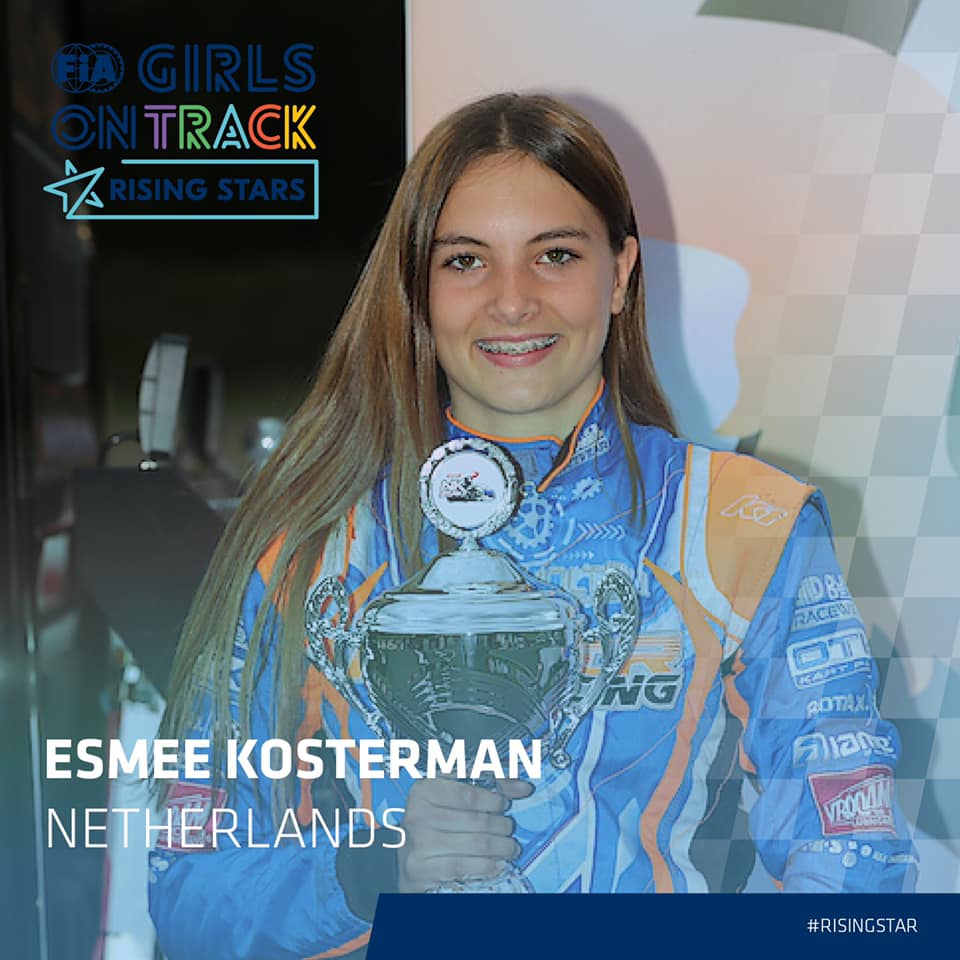 15-year-old Esmee’s interest in motorsport came at the age of nine. After watching her brother Michael karting, she too developed a passion for speed. In the six years she has been racing, Esmee has competed in several series including the 2018 FIA CIK Karting Championship in the Academy class, becoming the first female driver from the Netherlands to compete. Throughout 2019, she took part in many events, taking several pole positions and podiums, along with racing in the Junior class of the Rotax Max Championship, in which she went on to finish 3rd in the rookie standings. Since motorsport resumed a few months ago, Esmee has been racing in the NK 4-stroke Championship, already appearing on the podium.

15-year-old Lola has been karting since the age of nine, with her passion for motorsport stemming from her father. Racing in both the Mini and Cadet series around France she performed well, however after making the step up to x30 Junior class, she began to excel. Only one season later in 2019, she jumped up to OK and OK Junior karts. 2019 was an extremely busy year for her, competing in many different championships, mostly in the OK-Junior category. Lola raced in the FIA Karting European Championship, FIA Karting World Championship, Swedish Championship, in which she reached one final, and the WSK Euro Series where she reached two finals. Despite a lack of racing this year due to the pandemic, Lola has still been able to compete in the WSK Super Masters Series reaching two finals so far and the WSK Champions Cup. (photo credit: Lola Lovinfosse Facebook) 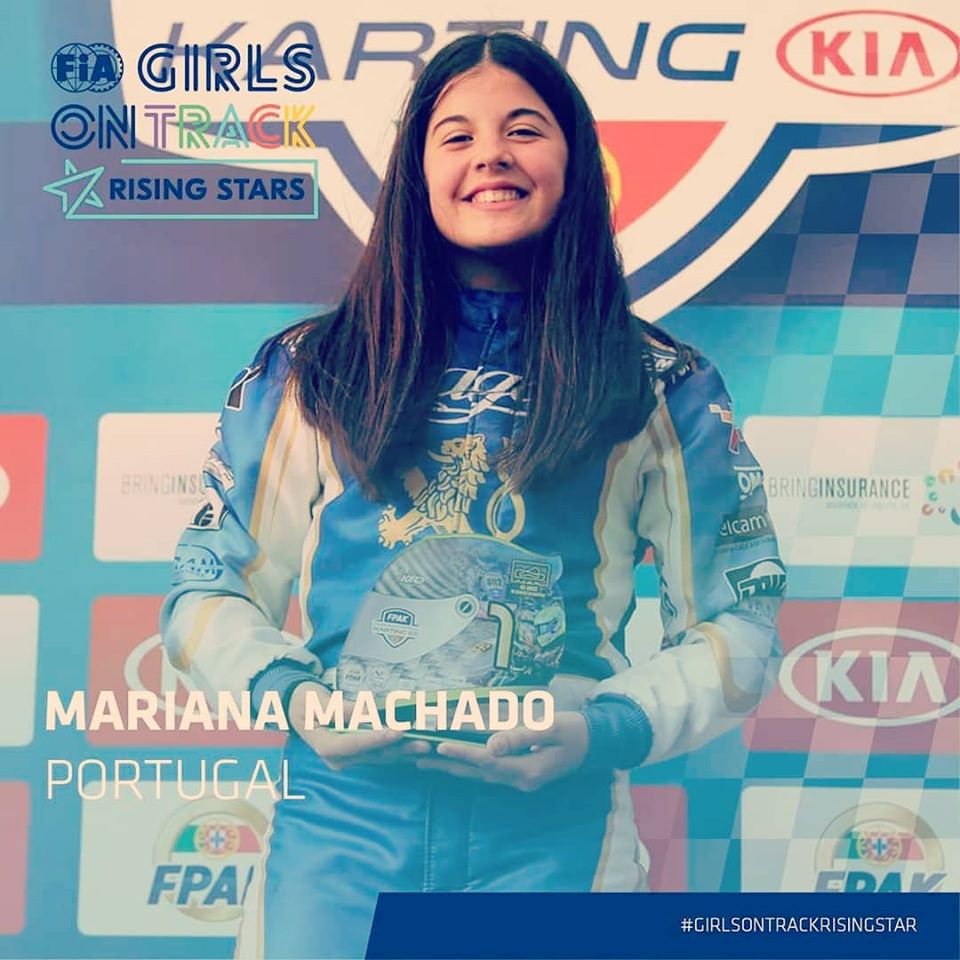 16-year-old Mariana first started karting at the age of five, and has been extremely successful throughout her career since. She became the first female driver to win the Portuguese Karting Championship in 2015. Towards the end of 2018, Mariana was shortlisted for the Richard Mille Talent Academy. Fellow Rising Star racer, Julia Ayoub was also in the group of three evaluated in the OK Junior class, though it was Brazilian driver who was successful. Although not racing with Birel ART Racing as the prize would’ve allowed, 2019 was still a very good year for Mariana. Competing in the x30 kart class, she finished 3rd place in the National Championship, as well as 4th in the Portuguese Karting Cup. Earlier this year, she took part in the Portuguese Open Karting Championship in her first race of 2020. Despite just three training sessions ahead of the event, she managed to finish 3rd in the final. 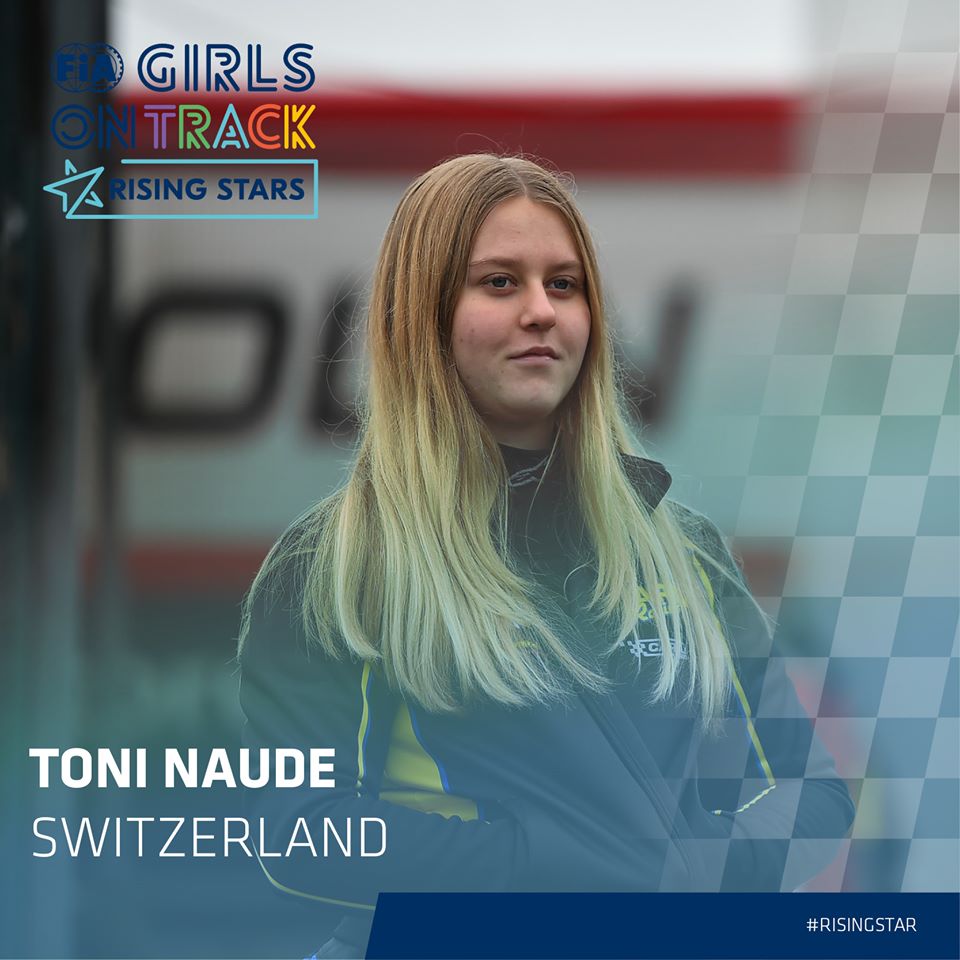 Born in South Africa, Toni moved to Switzerland at the age of four. It was in 2014, at the age of eight, that on a family holiday she was first introduced to the world of racing when her father took her to a go-kart track in Menorca. Quickly, she fell in love with the sport. In 2015, Toni began to consider taking racing more seriously. Her father organised a trial at a local kart track, and she’s not looked back since, starting her racing career in the same year. Toni’s karting has seen her compete both nationally and internationally, racing in several categories around Europe. Participating in the Super Mini class, she entered the 2016 and 2017 Vega Trofeo, and the 2016 and 2017 Schweizer Kart Meisterschaft series. In 2018, Toni took the step up to the OK Junior class as well as taking the leap into international racing. Competing in the Schweizer Kart Meisterschaft in which she finished in 4th, she also took part in the German Junior Kart Championship. 2019 was an extremely busy year for Toni, as she competed in several championships, and also in multiple classes. She participated in the OK Junior class in the WSK Open Cup, WSK Euro Series and the WSK Champions Cup, and the OK class in the WSK Open Cup in which she made a final. She also returned to the German Junior Kart Championship, making it to seven out of eight finals.

Australian driver Alice Buckley and Polish racer Natalia Gladysz were also selected for the initiative. However, due to COVID travel restrictions, they will not be taking part. They will automatically qualify for a second talent call next year.

You can read about the other 10 participants here.

One thought on “Meet the FIA Girls on Track – Rising Stars! (Part 1)”