Over the last few years, online communities celebrating a range of subjects have grown rapidly. Motorsport has its fair share, but only one can boast being the fastest growing, and that is WTF1. The launch of the site’s YouTube channel just over a year ago has massively boosted this, attracting thousands of views and over 200,000 subscribers on YouTube. I spoke to Jess McFadyen, the Head of WTF1 about their success and her love of motorsport.

Jess was born and raised in Brixworth, home to the factory that produces Mercedes AMG High Performance Powertrains. This meant her home village was full of people who worked in F1, and if they didn’t, they were huge fans. “My family didn’t (work in F1), but we were surrounded by it and so we’d always had an interest in motorsport. I also have a brother who was determined I would be a F1 fan. Even when I was a baby, I would be in my rocker watching and so it’s always been in my life,” McFadyen explained. Although a major passion, she never intended to work in the sport, and admitted: “it was really something I fell into.” Whilst at university, she applied for an internship at Red Bull Racing, however even then, she never thought it could be a career.

After being unsuccessful in her application to the Milton Keynes based F1 team, and having left university, a family friend working at Autosport mentioned a vacancy at Haymarket Media. “I always wanted to work in media, creating content and just being involved in that area, so I joined them as a sales executive. I wasn’t working on any motorsport brands but where I sat, I was actually behind Autosport so I was always chatting to them about F1. Fortunately, a place came up on their team and so I jumped at the chance,” Jess told me. She began working at Autosport selling advertising for the magazine and website and having found a role where she could talk about motorsport every day, decided that was what she wanted to do going forward. Whilst working there, the CEO of Car Throttle, Adnan Ebrahim, visited Haymarket Media to give a talk on the use of social media in advertising and interacting with millennials. Feeling that such subjects were not valued enough in her role, and being passionate about them, when she was approached by a recruiter for a role at Car Throttle, she didn’t look back. “I have always been one of those people looking at what’s the next big thing, and so I took the risk”.

8 months into the new role, Car Throttle made the announcement that they were acquiring WTF1. “I’d been following WTF1 since 2010/11 and loved it. It was so different from anything else and was very much aimed at making motorsport engaging and relatable,” McFadyen described. At this time, Jess’s role at Car Throttle was a step back from motorsport and working more in the automotive industry. However, after showing her enthusiasm and excitement for WTF1 she was given the opportunity to move brands. “I started working fulltime on WTF1 last summer in partnerships. We were nailing it in terms of content, but we didn’t have a video strategy so that was something that we brought on board via the resources at Car Throttle,” she explained. After setting up their YouTube channel, Jess set about making contacts in motorsport and not long after was promoted to Head of WTF1. Her new role meant brand founder, Tommy Bellingham, could focus on creating the content that had given the brand its reputation, rather than hitting gross targets and putting strategies in place.

As Head of WTF1, McFadyen’s role tends to be quite analytical in terms of ensuring targets are hit and videos and partnerships are successful. “The podcast is brand new this year and is something I really wanted us to try out. So, I look at how that is received, do we need to change anything, make those changes or continue what we’re doing if it’s working well. I speak to clients and partners and make sure that we are working with people and just making sure those relationships are strong,” Jess told me. Social media is also an important part of her role and finding ways that both WTF1 and their clients can use it to their advantage. “Yas Marina Circuit is a brilliant example as I think they are one of those [brands] who have really found their tone of voice and has really interesting content. That is also something we bring, being some of the most experienced creators in motorsport social media,” she said. 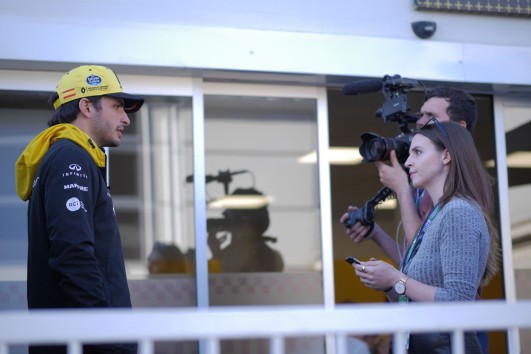 Over the last year, the WTF1 team have begun working closely with the Abu Dhabi based circuit, being invited out to the race last November and this year they are sponsoring some of their podcasts. “For a circuit, their biggest aim is to get more people to go to their GP. Because we are so fan-centric, – we do WTF1 for the fans and nobody else – it makes sense that we work with them. It’s a really exciting partnership and I’m excited to see how it progresses,” Jess explained. Making partnerships is part of McFadyen’s role and so to have such an influence in F1 align themselves with the brand, is hugely important to both WTF1 and herself. “It makes us feel very confident that we’re on the right track and are doing good things. The fact that Yas Marina is a repeat partnership definitely gives me the confidence to keep going. We’ve worked with a lot of drivers, with Jack Aitken being someone we’ve worked with for a long time, so having that confidence of someone in the industry is great,” Jess said.

WTF1 also partnered with the Azerbaijan Grand Prix for the first time this year, and so after the end of the 2017 season, were invited to Baku along with guest-of-honour Daniel Ricciardo. “We spent 2 hours just one-on-one with him and he was brilliant. Before we’d even been introduced to him, we went for dinner and he actually recognised Matty (Gallagher), our presenter.” McFadyen described this as one of the best moments of her career. “We then ended up flying back to London on the same flight, and we were all waiting for our bags and he said to us: ‘thanks for being the cool guys’. It was then that we knew we’d nailed it.”

Working in a small team sometimes means Jess gets the opportunity to get involved with the content. “I don’t write for the website as I leave that to the editors, but I do have a very hands-on role, which is great. I’m in the podcast, so I’ve dipped a toe into putting my face out there. I find it quite interesting to watch the reaction of people to seeing a new face on the channel, especially a female face. It’s been great and the fact we get to do such a varied job is very lucky,” McFadyen explained.

Although Jess enjoys being a part of the podcast, she prefers to stay behind the scenes. “I have so much respect for Matty because he does it every single day. He likes the notoriety of it, which I think you need, it wouldn’t really work if he was shy,” she joked. “My involvement will be there when it needs to be, the podcasts are great, but I don’t have any plans to star in any of the videos. The nice thing is that people know who works for the brand and so it’s great to be able to engage on that level.” Despite some negative comments about her gender after the first podcast, Jess has since seen an increase in females commenting on videos. “Every single person has the right to be there whether they are male or female. I couldn’t read the comments on the first podcast because I was so worried. I think we all tend to attach more to negativity rather than the positive. I knew I was taking a risk agreeing to be in the podcast, but when you start seeing a difference, I know we are doing the right thing. WTF1’s ethos is bringing motorsport to the masses and if we can make females feel that they have as much right to be there as males do, which I think is becoming the case, then that would be fab,” McFadyen told me.

Jess McFadyen is the head of the fastest growing motorsport community in the world, WTF1. The site has helped to revolutionise the way motorsport is shared, particularly with a younger audience. Speaking of her advice for people wanting to work in motorsport or on similar projects to WTF1, she said: “you don’t necessarily have to be a die-hard fan, but you have to be passionate about something. Have the confidence to believe you can do it. Especially with women, not only does the industry have to look at itself and say ‘are we projecting the right image to try and attract the best female talent?’, but equally females looking at themselves and saying ‘you know what, I can do that just as well as anybody else in the industry.’ Some of the best people I’ve worked with are women, Alex Thomson being one of them. She is incredible, she doesn’t stop, she’s super passionate and extremely knowledgeable, and she puts most of the guys working in the industry to shame. It’s about having that confidence to know you can do it, because you can.”

WTF1 has got some big plans for the rest of the season that, for now, are top secret, but we can be assured it will be exciting for both them and the fans. With Jess heading up the brand we can only expect them to further expand, and keep being the online phenomenon they have quickly become.

3 thoughts on “Jess McFadyen: “We do WTF1 for the fans and nobody else””