Social Media platforms such as Twitter, Instagram and YouTube have changed the way fans interact with whatever it is that they love, whether that be a sports team, singer, celebrity or politician. Formula One’s online presence has increased rapidly over the past few years and allowed fans and teams alike to connect and showcase their talents. WTF1 boasts the title of being the world’s fastest growing motorsport community, receiving thousands of views on YouTube videos in a matter of hours, and over 65,000 followers on Twitter alone. I spoke to the face of the brand, presenter Matt Gallagher, about how the internet has changed his life, and how it could change yours too!

Like many, Matt’s love of motorsport stems back to his childhood. “(I’ve loved it) ever since I was 4 years old. I was put in front of the TV whilst my Dad watched Formula 1,” he said. “I loved it from the moment I set eyes on it, and no other motorsport will come close to my love for F1.” Wanting to pursue a career in the sport was always a dream, but by no means an intention. He spent many years posting videos on YouTube as a hobby more than anything, with Gallagher saying: “to be honest it was always what seemed like a farfetched dream of mine to have some kind of involvement in F1. I started my own YouTube channel about 6 years ago now, purely because I wanted to showcase how good I was at an F1 game. Little did I know what that would help me to achieve.”

Now working at WTF1, Matt was actually scouted for the job after Car Throttle, the owners of the brand, saw his videos online. “On my own YouTube channel, I used to upload a series called ‘Rage Kitchen’, where I would rant about each race. Turns out the bosses saw my laid back, humorous style of presenting when I was insulting (Nico) Rosberg and thought ‘that’s the guy’,” he explained. This shows the power of such social media, with even owners and managers of companies looking for talent online. His role now encompasses many things, and much more that what we may see on screen, with Gallagher’s responsibilities involving everything from editing to meeting clients. “My job is to create the idea behind the video, the angle, construct the script/storyline, liaise with clients, present and basic editing,” he said, adding: “I’ll be here all day if I list out all the stuff I do!”

WTF1 has quickly expanded over the last few years, and this year will be no different. Already they have started a brand-new podcast series, and according to Matt, this is something they’ve been keen on for a while. “Pretty much since the launch of our YouTube channel we’ve been keen to start a podcast and with Yas Marina Circuit wanting to be a part of it, it was a no brainer to kick things off there. It will take a few episodes to fully gel but I’m already pleased to see the progress that we’ve achieved so far,” he told me. But there’s even more to come, with the team attending more Grands Prix than previous seasons and hoping to take part in more events. “(we are) going to Grands Prix, such as Azerbaijan, as well as events and opportunities that crop up nearer the time. Personally, I hope F1 Live London happens again, but it’s going to be a hell of an exciting year for WTF1,” Matt said.

The WTF1 YouTube channel is fairly new, but that doesn’t mean they don’t have high hopes for the future. “I see us continuing to expand in the way we have already after only a year of launching,” Gallagher told me, “we bring a completely fresh look to the world of motorsport and in Formula 1 that was needed in my opinion. Why ask Lewis (Hamilton) about how he’s going to perform next season when you can ask him which of his dogs would win in a race?” It’s this refreshing spin that makes their shows so popular, with particularly younger fans keen to watch something new, as well as giving a voice to those who often feel their opinions are not heard. 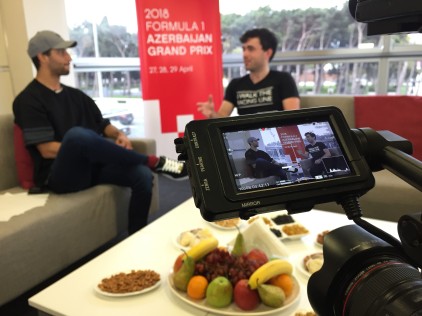 It’s not only fans who are keen to get involved with the team at WTF1 with drivers in many series wanting to collaborate. In the last year, they have travelled to Azerbaijan with Red Bull driver Daniel Ricciardo as well as interviewed F1 World Champion Lewis Hamilton. “To be honest, every time I’m interviewing any F1 driver I think to myself ‘how the hell did I get here when I used to be a youth worker?’. F1 Live in London was one of the most surreal experiences ever, walking down the road with the drivers and tons of people shouting ‘WTF1!’. That was completely outrageous and even today I’m shocked with how many people know us,” Matt said.

Social media platforms such as YouTube have changed Matt Gallagher’s life. From being a youth worker uploading videos as a hobby, to interviewing some of the most famous people in the world like Lewis Hamilton, his life is now unrecognisable. “I would never have been discovered and who knows where I would be today without it,” he said of the internet, adding: “social media is the future. Simple as. If you want your work to be viewed, then just keep going. It took me 400+ videos on my own YouTube channel before I landed my dream job. If you continue to work hard and post regularly, eventually, that one person will look over your article and change your life.” This was certainly the case for Gallagher when the Car Throttle bosses took a chance on him, and now he is at the beginning of what promises to be an exciting and successful career in the sport he has always loved.