Finland has always been famous for the racing talent the country possesses, with the nation being represented in series such as Formula One for several decades. With a vast motorsport heritage, it is no surprise that many racers start driving from an extremely young age. Emma Kimilainen first sat in a go-kart at only 1 year old, and since then has been in love with motorsport. Having raced in many series both nationally and internationally, she is now focussed on a new project with the Electric Production Car Series. I spoke to her about racing, returning to the sport after a 4 year break, and donating her trophies to help others.

Most successful racers begin driving go-karts when they are young, around the ages of 3-5 years old. However, Emma first sat in a kart at only 1 year old, and as soon as she physically could drive it, she wanted to. “I always liked cars and I behaved like a little petrolhead tomboy, always climbing on trees, ready to try new things. Fear didn’t belong to my vocabulary when I was a kid,” she said. Starting to drive at 3 years old, her older cousins passed down their old equipment to her, despite her being too small to reach the pedals. “A few pillows behind my back and I managed to reach out to the pedals of the little go-kart. Everything started because my Dad loved motorsport but didn’t have the chance to drive anything when he was a kid and decided to buy a go-kart together with my cousins’ Dad,” Kimilainen told me.

Having motorsport as a hobby is not easy, with young drivers needing large amounts of support both financially and practically from their families. With Emma and her family sharing the kart with another family, this cost was spread allowing them all to enjoy racing. Her first competitive race came at the age of 5 when she moved onto a larger go-kart. “Years went by and me and my brother were racing in many series. We travelled around Finland with a big caravan, spent time together, raced here and there and always thought inside the family that karting was a nice hobby, nothing more. My mum took care of the food and she was always really supportive, saying we kids can become whatever we want and they’ll stand by us. Dad was our mechanic and took care of teaching us how to drive and how to setup the car. He put a lot of time and effort into learning how the cars worked and luckily for us and all the beginners, the motorsport family is special. Everyone is helping each other at the paddocks, sharing information and giving a hand,” she described.

With both Kimilainen and her brother starting to race at the same time, she had someone she could compare her performances to. When she began to out-perform him, it became clear to the family that Emma had a potential talent. “We quickly noticed that I had something he didn’t have, and that was probably the attitude of never giving up, always finding even the smallest gap to attack for overtaking, and of course understanding the feeling and the limits of the car,” she explained. Many young drivers have potential, but when she reached the age of 12, the idea of this being Emma’s future career began to appear a real possibility. “That season I drove 12 races, won in 6, came second in 4 and had to retire from 2. I had fallen in love with winning and I also loved the problem solving with the setup. I must say that I felt more powerful when I could crush the doubts and attitudes there were against being a girl in motorsports. To show the overall prejudice ideology wrong, gave me strength to continue even though it has not always been easy,” Kimilainen said.

Her international racing career began at the age of 14 when she started racing in an Italian karting series, with her car racing career starting only a few years later. “I started in Formula Ford in 2005. I drove the FIA Northern European Zone Championship for two years and came 5th in my first year and 2nd (lost with 1 point) in my second year in 2006. I won the Ford Bowl championship that included both NEZ and Finnish championships. I was really lucky to work with great people on those two years, from whom I learned a lot, both driving and technical stuff,” Emma described. After taking a break from racing for 4 years following financial difficulties and then the birth of her daughter, she was offered the opportunity to begin racing in the Scandinavian Touring Car Championship. “I got this golden phone call saying that the team, PWR Racing team, had kept an eye on me for a very long time, since those first years in my car racing career, and now they are ready to build up a professional team in STCC. I was a bit worried because I hadn’t driven anything in four years. Of course, I started to train straight away but I didn’t know what they would think of me having a child because people usually think that after having kids, you would somehow become slower and more frightened, which is not the thing at all. But they said that if I have succeeded before, they know I can still do it because the talent won’t disappear,” Kimilainen told me. 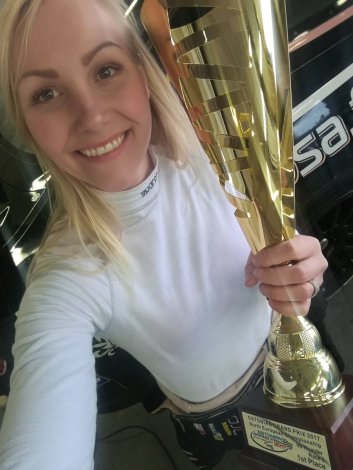 Returning to competitive driving was not an easy transition for Emma. Having not even raced a kart during her break, she admits that she had to learn the mental side of the sport again, as well as regaining her confidence. “Even though the talent was still there and I was really quick, I had to learn the mental part all over again. How to link the two most important things in my life together; how to reach out to your dreams but still be a good mother and a wife who can also financially take part as before. On the racing aspect during the first year, it felt like all the pressure built up by media, spectators and myself just rolled over the self-confidence and I became really nervous before the races. I was afraid to make mistakes because I didn’t feel confident enough about the car and we didn’t have the possibility to test and practice at all during those years in STCC. I only drove race weekends. Those insecure feelings about driving were completely new to me and I had to find the right ways to cope with them, and luckily I did,” she said.

This year Kimilainen is working with the Electric Production Car Series. Although her team, SPV Racing, were hoping to be competing this season, their car is still being developed, something Emma is enjoying being a part of. “My aims were to be racing in the EPCSeries with my team but the development work with the car is still under progress and that has been my job this year. Let’s hope we can have the series up and running soon. Until then I’ll do the testing, developing and promotion,” she explained.

In many of the series that Emma has competed in she has been the only female racer. However, this is not something she has been fazed by and she hopes that she will be able to create a positive example for others. “I hope that by the example of all the women who race, we could show the rest that it’s possible to come along and race equally against men. I love the fact that motorsport is the one of the few sports where women and men can compete equally. My goal has always been to be the best driver, not the best woman driver,” Kimilainen told me.

When it comes to being a role model, it is clear that the difficulties she had had throughout her career have encouraged her to help others. Having won many trophies and awards in her native Finland such as Driver of the Year and Best Female Driver, Emma went on to donate hundreds of trophies to be reused by small motorsport clubs. “I’m really proud of those achievements as there are a lot of crazy talented drivers in Finland. I donated all of my trophies (around 450) to the Finnish Motorsport Association and they passed them forward to motorsport clubs around Finland to be reused, which helps financially. My mum severed the plates from the trophies and made a big wall board with all the plates in it and those Driver of the year trophies including the first trophy I got from my first race at the age of 5, were the only ones I saved. They are the reminders of the hard work in total,” Kimilainen described.

When she’s not driving, Emma also has a successful media career having worked as a F1 commentator and TV presenter. “It actually started accidentally as I have been interviewed many times on different talk shows and then the hosts and producers were wondering how natural I was in front of the camera. That’s how I ended up first as a commentator on some TV shows, radio and Formula 1, and then later on I got the chance to be the host. I’ve not done anything that isn’t somehow related to the fact that I’m a professional racing driver and as long as I am racer, I don’t want to change that,” she said.

Emma Kimilainen’s life has involved motorsport from only 1 year old. Competing in her first race aged 5, she and others around her soon realised racing was something that she had a real talent for. However, her career hasn’t been straight-forward and like many, financial difficulties have plagued her racing. After having a 4-year break, since 2014 she has been back racing, helping to develop her new team, SPV Racing’s, new electric car. Knowing the support young drivers need, she donated over 400 of her trophies to be reused by the Finish Motorsport Association. Speaking of the support racers need, she advised anyone wanting a motorsport career: “the passion for the sport itself is really important. You must want to do it and to be ready to sacrifice a lot of time and effort. But the most important thing is the support. Without it, it’s impossible to succeed or even start the sport. Along the way when you find people that are trusting in you and helping you, take good care of them and remember to be grateful for their effort, as no one is successful alone. Motorsport is a team sport and it’s important to enjoy it.”